You would think with a title like ‘What’s Eating The Universe?’ that there is some cosmic menace out there but actually author Paul Davies is giving an up-to-date summary of what we know about the current universe with a little background detail to when it was first discovered over 30 chapters. Davies writers in a down-to-earth style that you’ll be surprised how much you absorb and understand without realising it. I think the biggest thing was seeing how many gaffes Einstein made and then corrected himself on. 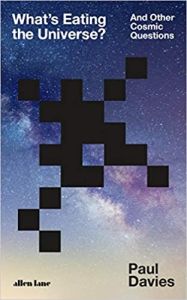 Some of the information is going to seized by developing SF writers, especially things like anti-gravity although it’s only a slight thing from dark energy. Davies point that scientists like to call things ‘dark’ doesn’t exactly explain why.

I’m going to speculate on something Davis points out that it takes two revolutions for an electron to come back to the same position. Is it possible that it is more than just a simple spherical shape?

What isn’t surprising is a reminder that Subrahmanyan Chandrasekhar suggesting with mathematical proof that stars implode into black holes or singularities lost for a time against the British Establishment. I hope that kind of proof is never dismissed again.

Davis briefly looks at the problems of time travel and even the ‘grandfather paradox’. From a Science Fiction pov, we’ve covered all kinds of ways that could be beaten to balance time out. Personally, I think we still have problems deciding what is the present.

Great rejoicing though as string theory is now considered not an option. I think any theory needs evidence first before theory. Subrahmanyan Chandrasekhar being an example of that because that was what he worked out from. Scientific dogma exists in any century.

Going back to the book title, this subject is explored in more detail in chapter 23 and where part of the cosmos is cooler than it should be. That and areas are being eaten by black holes suggesting that the universe is not as constant as we would like to believe it.

There are several topics, apart from time travel, that are of interest for research in Science Fiction. Of particular interest is Davies saying that there is no evidence for sentient life off-planet. I suspect I could have an interesting discussion on the subject with him regarding that. I mean, bearing in mind the distances of other star systems, even in the local group, if we apply the fact that mankind has been around for only a couple millennium and might not even last to the next, other species might go through similar things and last just as long.

That being the case, the chances of encountering messages sent across space are less likely to happen and, as he points out, unless we’re scanning in the right area, still likely to miss. Even so, SETI is more acceptable these days, so we can always live in hope. In some respects, it would have been interesting to see Davies explore the changes in astronomers in their attitude and why they are now more open to look.

He does explore the meaning of everything showing there are no real answers but we are always finding new information and learning more about the universe.

There’s a lot in this book that should make you think and provide a lot of background information to support it. The fact that I questioned things is clearly an illustration that he’s made me think. 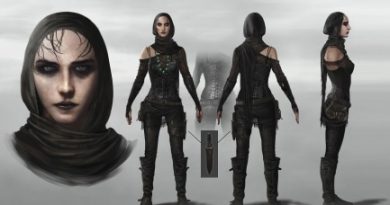 The Art Of Thief by Paul Davies (book review).

The Art Of Thief by Paul Davies (book review).