According to the evidence as collected by John Wyndham Beynon Harris and John Briley, it wasn’t just the village of Midwich but five other villages across the world that suffered blackouts and all females capable of becoming pregnant. Less than the usual nine months later, all gave birth to children that had the same characteristics of platinum blonde hair and unusual eyes that glowed occasionally when they displayed super-intelligence and mind control, mind-reading and telekinetic abilities.

There’s a certain detachment in their emotional mindset but as their intellectual age is older than their physical age that shouldn’t be surprising. The latter progressively got stronger as they got older and could mind-talk between themselves and pass information instinctively. The Midwich group also acted together making joint decisions with one spokesperson, David Zellaby, communicating with his ‘father’, Gordon Zellaby. It was only Zellaby’s strong will that resulted in concealing the thought of the bomb he was carrying prior to its timed detonation killing himself and apparently them all. It’s only an assumption that they died in the explosion and provided the means for them to escape undetected. 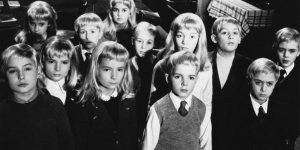 The other five village settlements across the world had similar off-spring. One village had stillborns, two villages’ men killed their babies and mothers before their powers began to develop. The example of Russia detonating a nuclear missile on their village wiping them all out after educating them shows the threat level they felt from their own branch of ‘children’ were gaining control too rapidly.

The assumption from all of this is these ‘children’ were seen as a threat, more so as they were planning to leave Midwich. In the circumstances, they were probably right. The normal humans of that early 1960s time period were fearful of the abilities they exhibited. I suspect that would be true of any era. The odd person exhibiting psionic ability would no doubt be observed than executed. A group of children all born at the same time after suspicious circumstances, possibly extra-terrestrial more so.

The way the foetuses grew rapidly in the wombs also suggests they would also grow rapidly into adulthood. The change in gestation might also give some hints about the alien aspect of these hybrids although what is purely a combination of both would be hard to know without seeing both species. The mind gestalt has to self-teach their own abilities with unfortunate consequences. Any species will act to protect itself from harm, so why should we be surprised when these ‘children’ acted accordingly? However, they never went on the offensive until they were attacked. Granted they became more extreme but this was largely using their own attackers’ weapons against them. David’s plan to disperse themselves across the country shows they were aware of their vulnerability of being physically close together.

The assumption has always been that these children were here to harm us but then you have to ask what were these extra-terrestrials intentions? Why don’t they just come down themselves? Maybe they were fearful for themselves and wanted to see how humans reacted to hybrids with similar attributes before risking their own lives. The fact that the children were apparently killed before adulthood would support their choice and mankind wasn’t ready for first contact.

However, had they lived, these children or adults, had they been allowed to grow up, would have been potential ambassadors between the two species and a successful first contact.

The failure of the first attempt did not stop a second attempt, although this time got too pre-teen before anyone realised what they were. The gestalt was made solely from six individuals from different nations. Presumably, a smaller number being seen as less of a threat although these ‘children’ were clearly more advanced that the previous groups. This would suggest that the aliens were observing and modified their plan.

This second generation also looked more normal until their eyes glowed when they intensified their concentration. They also revealed themselves at near teen-age and only discovered when there was an international intelligence test for children. The reveal that there are 6 individuals with identical IQs and building the cube in the same time. 37.5 minutes to make the cube but as they didn’t do it all at the same time, why didn’t the others do it faster? It took an intelligent adult over two hours to accomplish the same thing and none of the other children tried succeeded at all. Had this not been done, they would probably not been discovered.

Instead of having whole villages rendered unconscious, these birth is still considered by pathogenesis when no fathers were discovered. It isn’t believed that are alien hybrid, just an advanced human but that is mostly an assumption. Seeing the various mothers, one would have to assume that they were merely the hosts as none of them displayed any marked intelligence. 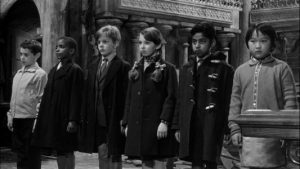 The ‘children’ were right about one aspect that humans were not ready for them, especially when they all met various military and intelligence officers who were interested in what they had to offer but not in their joint minds. Each of them caused them to do what they intended but against each other before leaving again. It does seem odd that they would then willingly allow themselves to be killed when they prevented a previous attack with an advanced device. Granted they would not want that to fall into human hands but it does suggest they staged their ‘demise’, just like the previous generation. Even more so as they resurrected the apparently dead Rashid just prior to the attack. Being seen to be dead is a good way to prevent humans attacking them. These ‘children’ are super-smart to have worked out all the possibilities.

From the alien perspective, the opportunity to have them become adults would make more sense than let the humans stop them prematurely. Even so, one would have to question their deaths. Although the military were preparing to destroy them, the intervention of each countries representatives would have prevented that from happening. That was until a screwdriver ‘accidentally’ moved and short-circuited the detonator and caused the entire military to react.

By now, these ‘children’ are adults and might even be the progenitors of their own children. Although it is doubtful that their intention is to ‘conquer’ the world, it would make more sense to ensure their survival than be left in the presence of regular humans who seem determined to kill them all the time.

As to the alien connection, maybe the message got through again that mankind was not ready for first contact and they are biding their time until they are. Would there be more generations if this species? Hopefully yes, although I doubt if they necessarily need to breed amongst themselves to have more of their own kind as they simply need to mate with normal humans or rely on more pathogenesis births. There is also a consequence of their rapid aging that they might not be alive for long. Whether that is true or not there is no evidence. The rapid aging to adulthood might just be an aspect of the alien progenitors and they could live far longer than standard human.

Would their alien progenitors collect them instead? The belief that they are there as ambassadors would suggest otherwise, more so as there is the possibility that they might appear as both might seem odd to each other in different environments. Having them on Earth would at least give them a better understanding of mankind by living among them, I doubt they would want a repeat of their youth.

These progenitors done this before but would they do so again? That would be entirely possible. The practiced manner in which they rendered whole villages unconscious and impregnated the female population more so.

The volatile name of calling them ‘the damned’ is more of a misnomer than fact. That title would, by rights, belong to the normal humans who deemed them a threat and reacted accordingly. In most respects, neither sets of children acted ruthlessly against people who did not attack them first. 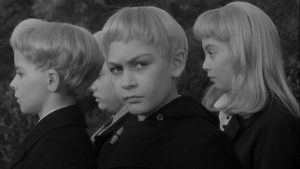 Should you encounter any of these children or adults, treat them with respect and don’t antagonist them. They are pretty much peaceful until attacked and it will take a moment’s stare with their eyes glowing to give you the fate that you were going to give them.