‘Welcome To The Greenhouse’ is an anthology edited by Gordon Van Gelder. He asked 16 writers ‘who speculate about the future to consider the subject of climate change’ back in 2011. 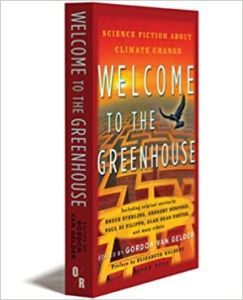 It should be emphasised this is commenting on impact of changing the climate, not offering solutions. There were two exceptions. The first is the tongue-in-cheek ‘Not A Problem’ by Matthew Hughes where aliens come along to harvest the humans for their own food, which I found very entertaining.

The other story is Paul Di Filippo’s ‘Farmearth’. This is a coming of age and responsibility story. A gamer using the Farmearth application makes adjustments to reduce the impact of climate change without the results also incurring nasty effects on human lives. I found this story to be the best thought-out on the topic.

Like all anthologies, there are some better stories and some not so good ones. This anthology is unusual in that I found three stories that left me thinking what the heck?

The first is ‘Sundown’ by Chris Lawson. The story centres on the premise that the Sun suddenly goes cold and stays that way, which in turn lets the Earth be covered by ice. While we did not fully understand all the Sun’s processes, even when this story was written, nuclear processes in massive bodies do not work like that.

The second story, ‘That Creeping Sensation’ by Alan Dean Forster had enlarged insects due extra oxygen in the atmosphere allowing them to grow bigger. We have six-inch bees. Excuse me? They would not be able to fly for starters and don’t get me going on foraging for nectar and pollen to carry back to their hives. To me the story was totally unbelievable.

The final incredible story was ‘Damned When You Do’ by Jeff Carlson. It is about the reaction to a single person, Albert, who has monstrous effects on the climate as he rapidly circles the Earth from the moment he was born. Need I say more?

These three stories really let the anthology down. They tainted the other stories that used the tradition of letting Science Fiction magnify a political or social point about climate change. Perhaps the best among these was Brian Aldiss’s ‘Benkoelen’ and Joseph Green’s ‘Turtle Love’.

The anthology was published in 2011, ten years ago now. The points these stories make hold true today as much as they did then, which in itself says something about the global progress on climate change. The anthology is worth reading for the thirteen sensible stories alone. 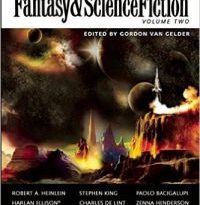 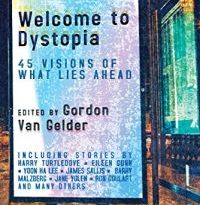 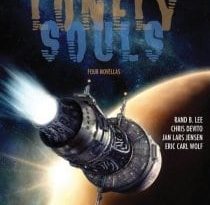