I was watching a DVD of ‘The Tales Of Beatrix Potter’ recently, not having seen the film in a couple decades. I saw the film originally back in 1972 at the local fleapit with the ushers trying to dissuade me because other cinema-goers had been put off because it had no dialogue. Although I didn’t have any interest in ballet back then or even now come to that, I wanted to see the film having seen a preview on TV.

Seeing Beatrix Potter’s characters brought to life in ‘realistic’ looking masks and costumes that are still more than passable today also shows some films don’t age but certainly deserve watching again and again. Of course, we can tell the difference between stage and exterior filming even back then but that doesn’t change the magic and the attention given. Pull the film for yourself and see if I’m right. ‘The Tales Of Beatrix Potter’ has an elegant charm all to itself. 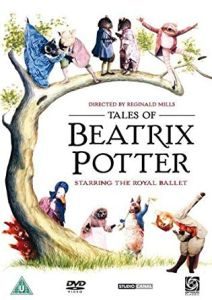 Anyway, I was wondering if there was a book about the film and found one that was published back in 1971 by the same publisher, Frederick Warne, who published Beatrix Potter’s books no less. Bear in mind that there were very few ‘Making Of-’ books back then and surprised I missed it. As such, there were few other books as templates as to how to do such books at the time. 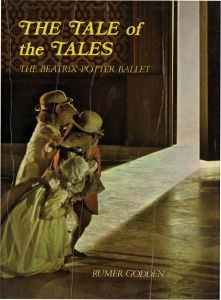 With Rumer Godden’s book, ‘The Tale Of The Tales: The Beatrix Potter Ballet’ we get a real deep insight into the film’s production. Godden admits in her introduction that she thought she was an odd choice to write the book as she was a fiction writer but found it hard to refuse Frederick Warne’s offer to write it.

What you then have is a fabulous look into how the film was conceived and its production and problems in the first quarter of the book. The second half of the book tells the stories from the film in Beatrix Potter’s style and putting the dialogue there that is absent in the film.

The book is loaded with photos, although none behind-the-scenes as that might break the illusion. Godden rarely refers to the dancers who wore the costumes to keep the illusion, although they are shown on the final pages. The sketches shown would be called storyboards today.

All in all, this is a fascinating insight into the 1971 film which, if you enjoyed, should be on your list to get a copy.

check out website: www.penguinrandomhouse.com/authors/233485/frederick-warne  just to show they still exist