This is a documentary about nutrias. These are the world’s largest rodents, weighing in the range of 20 pounds or more. They began invading southern Louisiana swamps about 1958. They have driven out aquatic wildlife in that area. The issue of what to be done about them is controversial. Animal protection and fashion sources benefit from the presence of the nutrias.

The trappers in the swamp want to be free to trap them to help preserve their lifestyle. ‘Rodents Of Unusual Size’ looks at the nutria, its biology, behaviour and its history in the United States. It also looks at different cultures in the area and how they interact with it. Directors: Quinn Costello, Chris Metzler, Jeff Springer.

In the film ‘The Princess Bride’ (1987), based on the novel by William Goldman, Westley must travel though the fire swamp to save his true love, Princess Buttercup. The danger of the Fire Swamp is that it is ruled by the R.O.U.S., the Rodents Of Unusual Size. In the film, these are ridiculous looking small monsters that look like 20-pound rats. Could creatures like that really exist?

If you can ask that question you need to see this documentary. Looking no less ridiculous are nutrias, the world’s largest rodents, somewhere in the range of 20-inches long not counting the tail, which just adds to the resemblance of the nutrias bears to a rat. Nutrias are equally happy on land or in water.

They invaded the southern coast-land of Louisiana in 1958. In the 1970s, trappers could make good money for their meat and fur and today they are the dominant mammal species in Southern Louisiana.

The nutria is well suited for semi-aquatic life. It has teeth like a beaver. That might not bother most people, but the nutria’s teeth are also sharp like a beaver’s, but for one difference. Nutrias’ two front are red-orange. It looks like two carrots protruding out from under its upper lip. But they give it an uncanny look. 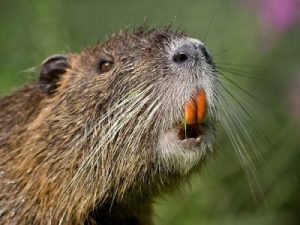 Nutrias started showing up in the United States sometime around 1958. They had come north breeding with muskrats. At first, this new strange animal was considered to be good fortune for the people of the marshlands. After all, it was a great source for saleable fur and one animal had a lot of fur.

But just about that time animal rights advocates campaigned to awaken people to the cruelty inflicted on animals, the demand for genuine animal fur dropped off. With the profit dropping off, nutrias escaped or were released into the swamp with little thought of how well they would survive. It turned out that they were well-suited to the swamps. With webbed feet they were agile in the swamps and they out-competed the muskrats.

The nutria is a rapacious eater. It eats water plants down to near the ground. Meanwhile it attacks the roots of plants up from their burrows. With no roots the plants are washed away by rain and stream.

A nutria destroys the habitats of other aquatic species. It will have four litters a year and its breasts are situated toward its back so it may feed pups while swimming.

The nutria has enflamed various conflicts in Louisiana. The film looks at a golf club operator who wants to kill the nutria because of the damage it does to the turf. We also get a picture of the lifestyle of the Cajun trappers who at once are developing a taste for nutria meat, others who see the nutria as a threat to their livelihood and others who are learning to like the meat who live in the knowledge they has little protection from nutrias and from storms.

This animal is looked at in this film from cultural, biological, and historical perspectives. I rate the film +2 on the -4 to +4 scale or 8/10.

‘Rodents Of Unusual Size’ will open in Los Angeles on 14th September 2018.