Sat in the images folder of my phone right now I have a 2min video file. It contains a single frame off every shot from ‘Star Wars: A New Hope’, meaning that, if you so wanted, you could watch the whole film, without sound and still pick up the gist of what is happening. It is another way of experiencing the film and as fans, including the film’s own writer and director George Lucas, we seem content to endlessly reinterpret and remake what was shown on cinema screens back in 1977. 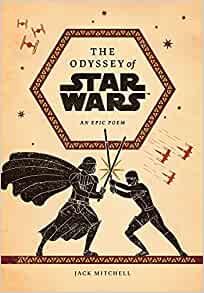 This also applies to the world of ‘Star Wars’ literature, too. Following on from Ian Doescher’s ‘Verily, A New Hope’, a Shakespearean retelling of the first movie, published back in 2013, we now have Jack Mitchell’s ‘The Odyssey Of Star Wars: An Epic Poem’ which reimagines the original trilogy, plus some additions from ‘Rogue One’, et al, into a story worthy of Homer.

Not that Homer. This is ‘Star Wars’ written as the poem of the Iliad and the Odyssey which recounted the Trojan War and Odysseus’ subsequent journey to get home. As such it’s actually best read aloud or even performed. Take, for example, the moment that Luke and Obi Wan encounter Chewbacca in the Mos Eisley cantina:-

Now who is unfamiliar with the skill,

The bowcaster, the growl, the towering wrath.

Had been his home, ‘til Wookies felt the chain

Of slavery, forced to hew the wroshyr tree,

Appointed him a buccaneer’s first mate,

Once you get by the archaic style, deliberately imitating classical poetry’s metre and form, you are treated to a concise backstory for Chewie, where he’s from and how he came to be by Han Solo’s side. Mitchell also allows himself to let the history of the prequels be presented where he best thinks it fits the original trilogy. For example, it is only when Luke reaches Dagobah that Mitchell then uses Yoda’s concern over Luke’s impatience with the training to recount the discovery of Anakin, the battle of Naboo and the Clone Wars as grounding for the Jedi Master’s fear.

You might ask yourself, why though, if you know these stories backwards, as most fans do, you need another retelling. I would argue it’s because Mitchell, a Stanford educated poet, is adept at being able to not only to make the language sing, but also create these reflections, not possible in a film or straight novelisation. Take the scene where Obi Wan sacrifices himself to let Luke and friends escape:

At that the Jedi Master flicked an eye

Toward the Falcon, where he saw them both,

A nimble princess and a handsome youth,

Together. As a captain on the deep

Whose ship has waited ages for a breeze

Will sniff the dawning air, scenting a shift,

Calling his crew to wake, to rise, to work,

So Obi-Wan perceived it, stretching out:

The future and the past, theirs and his own

And Vader’s. Then the world of human grief,

Of hope forever ending and renewed,

Seemed to dissolve; and, like he used to heed

A whisper of th’ indwelling power that binds

All living things and balances our fate,

And so renounced his will and raised his blade.

Forgive the lengthy excerpt, but it’s cracking stuff, especially when read out loud. If I were a teacher, I could see myself using ‘The Odyssey Of Star Wars’ as means of opening up a discussion about classical literature, poetry or the theatre or even the epic poetry of ‘Beowulf’.

Because the language can be challenging, not just the rhythm, but also the numerous in-world references, I found myself having to approach the text in chunks, so it perhaps doesn’t flow as naturally to a reader who is used to prose, but I think it is absolutely worth persevering with and taking your time over the words Mitchell has chosen. I was pleasantly surprised by this title, having been less keen on the Shakespeare adaptations, but found myself enjoying this a lot more. Buy it for the fan of ‘Star Wars’ who may also love poetry, the theatre or simply wants a different, but beautifully rendered version of the classic saga.