In the 1994 film ‘Ed Wood’, the title character, gets enthusiastic over some stock footage, saying that with enough of that he could make a movie. In fact, lots of Science Fiction films have made use of stock footage to save on budgets. Sometimes it is a sequence of lizards fighting with the claim they are dinosaurs.

Maybe it is footage from a Russian Science Fiction film reused in several cheap features like ‘Voyage To The Planet Of The Prehistoric Women’. Of course, footage of V-2 launches was used extensively in 50s space exploration films. Perhaps the most creative use of stock footage was in ‘The Magnetic Monster’. I think the main purpose of this film was, in fact, to use footage from the 1934 German film ‘Gold’.

The result is actually surprisingly good for such an unambitious film. The integration of the German footage is really quite well done and the story that was created is one of the most interesting concepts of 50s Science Fiction. 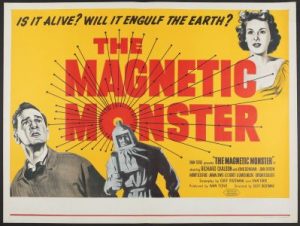 I have to admit that I particularly like the idea of a material being a menace, as opposed to an animal, a plant or a machine. A material that is dangerous by its very nature is an interesting concept. Other films that had such a threat were ‘The Monolith Monsters’ and ‘The Night The World Exploded’.

In this film, we are dealing with a new element. Most new elements are highly unstable and can exist only for a small fraction of a second before decaying. Serranium is just the opposite. It is not just stable, it is super-stable, pulling in energy from its surroundings and converting it to matter and growing.

This could have made for a very good Science Fiction film. Unfortunately, what we have is a frustrating combination of good and bad. The dialogue is hokey and the scientific jargon just does not sound believable. Curt Siodmak or Ivan Tors juiced it up in an attempt to sound super-scientific, but it just sounds ridiculous.

This was the first of three films about the fictitious OSI, the Office of Scientific Investigation. These are the people who get invited in like the FBI might be. Only they are called in when mysterious scientific phenomena are discovered. You know, like when suddenly the air over Los Angeles becomes highly radioactive or when aliens land or that sort of thing.

Really what they would probably do, if such a group could get funding, is sit around all day like the Maytag repairman. I think the producers got excited about the Manhattan Project and decided there were all kinds of nifty peacetime uses for on-call scientists.

A scientist fooling around on his own in a rented room over a hardware store creates the new element that is hyper-magnetic and radioactive, as well as having the odd property of absorbing energy and growing. Clearly this is a case for the scientific guys at OSI. These investigators are patterned on G-Men but are called A-Men as in A for Atomic.

Each is like a cross between ‘Dragnet’s Joe Friday and Mr. Wizard and they discover that ‘a dangerously radioactive element [is] at large’. First they have to locate the element and then they have to find a way to stop its deadly reign of terror. Finding the element was created by one scientist experimenting on his own one sagely concludes ‘in nuclear research there is no place for lone wolves’. How true.

There are many crime film clichés in the story before it comes to its final conclusion at a Canadian nuclear research facility. Why Canadian? Well, the film had the German stock footage which featured people dressed in heavy coveralls and flat hats. It didn’t look like in the United States, so the people were Canadians. Who knew what a Canadian was supposed to look like anyway? These Canadians dressed a little German, but what the heck.

1953 was certainly Richard Carlson’s year for Science Fiction films. In one year, he made ‘It Came From Outer Space’, ‘The Magnetic Monster’, and ‘The Maze’. That is not a really distinguished list, but it firmly established him as a Science Fiction actor and the following year he was the lead in ‘The Creature From The Black Lagoon’.

Other familiar faces include King Donovan (‘Invasion Of The Body Snatchers’), Bryon Folger, Strother Martin (‘Cool Hand Luke’) and Jeane Byron. Each but the last is a familiar film actor. Byron’s claim to fame was to play a teacher on the TV series ‘The Many Loves Of Dobie Gillis’ and later she played the mother on ‘The Patty Duke Show’.

For a film that throws around silly terms like ‘a paramagnetic force’ and its ‘epicenter’, it’s interesting that when they show a blackboard of mathematics, it is real mathematics written by someone who knows what math should look like. On the other hand, who knows what a power plant to destroy an element looks like?

So in the final scenes, the viewer is not sure what is happening, but it is impressive looking. Supposedly the reactor or whatever it is is built in a cavern under a lake. An explosion blows so high that we see it over the surface of the water. Actually, the footage is of a depth charge being detonated. There is no explanation what saves the people around the reactor from drowning and having the reactor area flooded. I suspect we are not supposed to ask. 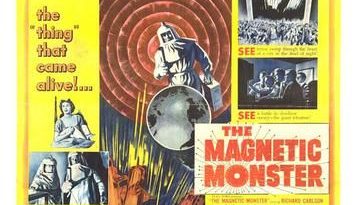