‘Destination Moon’ (1950), the film that probably should have led off the 50s Science Fiction cycle, actually is still an enjoyable adventure film, even if parts are a little dated. It is colourful and fairly realistic, certainly taking into account that it was released in 1950. Not that some of the information known then was handled as well as it might have been. The acceleration of take-off is made to look more of a horror than it is in real life.

Certainly details of weightless flight look more realistic than they did similar effects in ‘Rocketship X-M’. The script calls the Moon a ‘planet’ not once but twice. Of course, because of its size, very unusual among moons, some astronomers have been tempted to call it that also and to say it and Earth form a double planet. Somehow this film’s colour captures a 50s feel better than the black-and-white ‘Rocketship X-M’. The colour shows off better the baggy post-war clothing fashions.

Somehow talk of going to the Moon in an early 50s film still has excitement that NASA footage of the actual moon launch lacks. It is much the same sort of thrill one gets from Jules Verne, even if he is describing an 1866 submarine that has long since been surpassed by fact. It is the fact that this submarine is around in 1866 that is exciting. 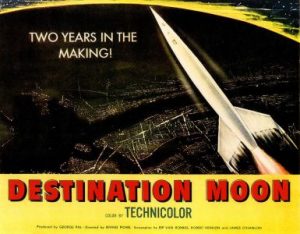 What does seem somewhat dated is the Cold War paranoia that is present through most of the film. The nasties have sabotaged a rocket at the beginning; the main reason given for going to the Moon is to beat the enemy that tries to use political pressure to sabotage the mission and finally the important reason for returning to Earth is to tell the world how vulnerable it is from the Moon. Meanwhile, when the Americans get to the Moon, they claim it for the good of all mankind.

Once they get to the Moon, it turns out to be a pretty place to look at, but somehow the film makes lunar exploration itself seem dull. The scriptwriters have no way of engaging the viewer in the actual exploration process. What does save the film is a clever little engineering puzzle that becomes the last treasure of this film. It is one that would do credit to a 50s Science Fiction story and it has a reasonably nifty solution. What is dramatically lacking is the return to Earth.

There are some interesting similarities between ‘Destination Moon’ and ‘Rocketship X-M’. Both use obnoxious, harmonica-playing comic relief characters, both have Texas humour and both use stock footage of V-2 launches, though this film uses it more realistically.

George Pal uses the Chesley Bonestell paintings that he would make use of in later films, especially in the prologue to ‘War Of The Worlds’. The integration of the paintings and the forced perspective sets really gave the feel of being on another world, where ‘Rocketship X-M’ had alien landscapes that did not look at all alien. Even at the time people knew that showing the surface of the moon as a cracked, dried riverbed was wrong, but it made it much easier to use forced perspective to make the lunar landscape seem much bigger than the set on which the scenes were shot.

This is a much more enjoyable looking film than most space travel films of the 50s. The ship itself is not a V-2 and that in itself is something of a novelty. Pal designed a nice streamlined ship that looks a lot better than the real thing. The simple fact is that this is just a nicer film to view, both prettier and less downbeat, than is ‘Rocketship X-M’.

If there are some technical problems with the rescue in space or in how weightlessness is shown, we can forgive them and still find this film good to watch. The biggest complaint most people have with the script is the incredibly dense character of Sweeney. Perhaps he is overly stupid, but the writers felt the need to explain the science and needed someone to whom people could explain what was going on and could serve as a sounding board.