I’m an apt reviewer for this book because I live in Bristol, England where the most famous landmark is the Clifton Suspension Bridge designed by Isambard Kingdom Brunel, the city’s favourite son. Well, almost. Pretending that a French cockney was really a Bristolian at heart is quite a stretch but we don’t seem to have anyone else, so he’ll do. His ship, the S.S. Great Britain is parked in the docks and he built our main railway station, Temple Meads, as well. 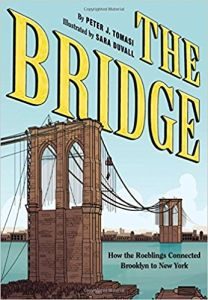 To the book, then. ‘The Bridge: How the Roeblings Connected Brooklyn to New York’ is the story of an American landmark. The Brooklyn Bridge, a bigger suspension bridge than ours in Bristol but only 9metres higher, was designed by John Augustus Roebling. When he died in 1869, the job of building it fell to his 32 year-old son, Washington. Aptly, for this year of suffragette celebration, his wife played an important role, too. It’s a great story…and true!

The tale of how the Roeblings connected Brooklyn to New York starts in New York City, 1852 at the Fulton Ferry, East River. The ferry can’t move because the river is frozen. Father and son, John August Roebling and Washington, make an icebreaker out of available materials so they can continue their journey.

The next scene is in Trenton, New Jersey at the Roebling Wiremill Factory, where we see young Washington doing menial labour. That surname is German and they had a strong work ethic. Da Roebling was hot on efficiency, too. ‘Failing to prepare is preparing to fail,’ he tells young Washington, sending him off to Rensselaer Polytechnic Institute to study analytical geometry, mineralogy, civil mechanics, geology, structural engineering and design and construction. Education back then was not meant to be ‘fun’. Schools and parents prepared you for a hard life of toil and trouble with sparks flying upward, especially in engineering.

Too soon, Washington goes off to the Civil War. On the bright side, he meets Emily Warren, a general’s daughter, and they fall in love. Post-war, it’s back to the family business and winning the contract to construct that bridge. Like all huge engineering projects, it took a lot longer and cost a lot more than planned but that was partly because the Roeblings built it ready for the future and for the heavier vehicles to come.

It also cost quite a few lives and, although this necessarily simplified version makes the Roeblings heroes, let us not forget the thousands of men working for $2 a day who actually built the thing. Many died in the process and, as usual with these things, a lot of them were Irishmen. Whenever Brunel is glorified in Bristol conversations, my dad was always quick to point out that Irishmen did the work. I found out later that thousands of Englishmen laboured on these big projects, too, but don’t tell my dad.

The Brooklyn Bridge construction story is a heart-warming tale of trials and tribulations overcome. Washington is a likeable character and a hands-on engineer, getting down and dirty with the men to the point where he makes himself ill. A few of the staff have strong cameo roles and the co-star is his wife. Their enemies are the penny-pinching political Board of Trustees who dog their heels all the way.

Even if you’ve never been to Brooklyn and have no interest whatsoever in bridges, this is well worth reading as an inspiring human story. Peter Tomasi’s script is exciting and even funny in places. He clearly did tons of research. ‘The Bridge’ and others like it are proof that graphic storytelling can be used for serious subjects, not just long underwear characters shooting rays from their eyes. It’s clearly no substitute for a serious, adult engineering book on the subject but will suffice for the casual reader with a casual interest. The art of Sara Duvall is that modern sort with clean lines and bright colours. It’s attractive and tells the story without unnecessary ruffles, flourishes or distractions. There was only one thing that puzzled me. Why do cartoon beards always look better than mine?