Publisher’s Weekly dubbed Turtledove “The Master of Alternate History”. Within that genre, he is known for creating a variety of alternative history novel counterfactuals, such as survival of the Byzantine Empire or an alien invasion in the middle of the Second World War.

In addition, Harry has been credited with giving original treatment to alternative themes previously dealt with by many others, such as the victory of the South in the American Civil War or the victory of Nazi Germany in the Second World War.

John Jarrold said: “I am so delighted to be working again with Harry, having published his ‘Darkness‘ series at Earthlight. I first read his work with the Videssos novels and he is both prolific and an outstanding writer. His knowledge of history and intensely involving writing make him a star who I’m proud to welcome to the John Jarrold Literary Agency – we have a number of projects to discuss with publishers.” 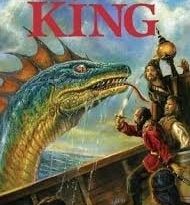 Every Inch A King by Harry Turtledove (book review).

Every Inch A King by Harry Turtledove (book review).