It’s been a while since I saw the 1958 film ‘The Blob’. It shows an odd age when there is a less than sinister ditty for an opening song from Burt Bacharach for such a dangerous adversary but then ‘The Blob’ was seen as a teen flick to be shown in drive-in cinemas than a horror/Science Fiction. What did they know in those days?

Anyway, Steve (actor Steve McQueen) is making out or rather just kissing Jane (actress Aneta Corseaut) on a hill when they see a meteorite crash to Earth. Steve is a bit of a geek by the way and they quickly rush off to investigate.

Meanwhile, an old man (actor Olin Howland) discovers the meteorite first, resembling an egg, and it cracks open and gets some goop over his hand. He runs out into the road and nearly into their car and the two of them take him back to the town and Doctor Hallen (actor Stephen Chase). The goop has encased the old man’s hand and the doctor sends the ‘teen-agers’ (McQueen was 28 and Corseaut was 25 at the time and the other teens weren’t much younger) to see if anyone knows what happened to the old man.

One little detail, they run into a group of other ‘teen-agers’ who slow them down but want to challenge him to a car race. He out-wits them but runs into the local police and then invites the three other teens to help him check out where the old man came from. They find the meteorite crater and a deserted house. Well, all right and a cute dog who goes missing when they get back to the surgery.

The doctor calls his nurse in, planning to amputate the old man’s arm but it’s too late, he’s been totally absorbed into the…er…blob. Seeing it as hostile, the doctor tries to stop it but discovers it absorbed and killed his nurse. Steve and Jane gets back and, when he goes to find out where the doctor was, witnesses him being absorbed into the blob. Convincing the police about it is a lot harder but as it’s a murder, they are obliged to check. However, there is a singular absence of anyone there and no one seems to remember the old man. Lt. Dave (actor Earl Rowe) calls the teens’ fathers in and then sends everyone home thinking everything can be sorted out in the morning and that Matlin got a lift to a doctors convention.

After everyone has gone to bed, Steve and Jane sneak out to have a talk about what happened. They decide to get the three teens hey met earlier from the late night cinema to help to warn people of the danger. Steve is convincing considering they have no evidence.

Steve and Jane find the dog outside Steve’s father’s store and, inside, they encounter the blob. They lock themselves in the freezer when trying to escape. The blob tries to follow under the door but changes its mind. You should be able to figure out its weakness.

With Lt. Dave gone home and Sgt. Jim Bent (actor John Benson) ignoring their phone call, Steve leads the other teen-agers to wake everyone up to warn of the danger. This brings Lt. Dave out and who partially believes them. Meanwhile, the blob has gone to the cinema and then to a diner. Steve and Jane have gone in the diner to rescue her little brother Danny. The blob has other ideas and the police are convinced from the outside. From here, you’re on your own.

Y’know, it’s very weird, but for a small town, no one seems to know who everyone is. Well, until towards the end when parents and teens unite and focus on stopping the blob. Well sort of. For it’s period and bearing in mind its age, it actually holds up pretty well all considering. You do kind of care for the cast which is important in horror movies and sometimes forgotten in modern films. 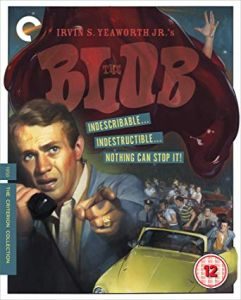 There are 2 audio commentaries. I had a slight glitch on the advance disk where I couldn’t switch into them and will probably not carry over to the final disk. If it does, just use the blu-ray/info and switch it into one of the other two channels.

The first audio commentary is with producer John H. Harris and film historian Bruce Elder but not at the same time. Harris gives a lot of the details, including how McQueen got the part. As Harris died in 2017, it had to be done before then and as he describes DVDs coming out establishes how far back you need to think. Harris also understood the needs of SF in terms of having a valid solution on how to kill the blob at the end, which doesn’t actually have a name in any of the films. Each of them intersperses different information.

The second commentary is a mix of director Irwin S. ‘Shorty’ Yeaworth Jr. (1926-2004 – I’m giving his life-span so you can work out when this was done before he died) and actor Robert Fields. Oddly, Yeaworth explains that he didn’t actually choose the opening song but glad they had it from a relative unknown called Burt Bacharach. His information fills in a lot of info from the title to lack of overall coverage simply because they didn’t have enough film. Fields pops on covering his own appearances in the film and how he got the part, coming like all the other ‘teens’ from New York. Odd fact that after two films of driving cars in reverse was being copied by kids in real life had them stopping doing that.

Only two extras. ‘Blobabilia’ shows cast and some of the behind-the-scenes material. Rather surprisingly, there are more miniature effects than you would think. The ‘Trailer’ encapsulates the plot which was customary in that time period. It even shows the blob which would be avoided these days.

I think the reason why ‘The Blob’ is still fun to watch, even today, is because it looks every day and a lot of the tropes like not showing the creature keeping up the tension is something all directors learnt from although it was largely done for budget. The night is a godsend for scariness and hiding background. Don’t underestimate these old films as a learning experience.