‘The Actual Star’ is one of those books that tries to tell multiple stories at once, intertwining them and using each to explain something about the others. In this case, the author is aiming to critique our world, in particular, concepts such as gender identity and self-sacrifice, while playing with the classic Science Fiction trope of imagining an alternative history of our planet. 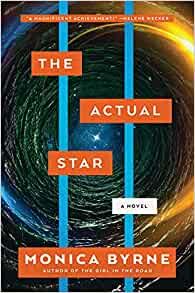 In this case, Monica Byrne takes the sophisticated Mayan culture of Belize and Mexico as her starting point. Known today mostly through ruins such as Chichen-Itza, her immediate focus from the start is the bloodletting and human sacrifice that characterised their religious beliefs. The ceremonial bloodletting done by the characters in this timeline is contrasted with the much more furtive ‘cutting’ done by Leah in the present day, giving Byrne the opportunity to pass some sly observations on how the socially awkward fit into the basically conservative world of middle America.

Then there’s the storyline set a thousand years in the future, with the ice caps melted and an entirely new world order established. Inevitably, this provides Byrne with space to comment on things like colonialism, ethnocentrism and, of course, environmentalism. She’s invented a considerable number of words to describe the various concepts that define life in this far future, detailed in the appendix at the back of the book. There’ s a veritable shopping list of post-postmodern ideas here, from a treaty with animals not to eat them through to the principles of cooperative nomadic anarchism that characterise the ‘Laviaja’ political philosophy of the protagonists.

If this is starting to sound like a green Millenialist’ s manifesto then, yes, that’ s pretty much where the story starts. But the lead character in this future timeline, Niloux deCayo, does in fact set out to challenge the established rules and, when she does so, she finds herself persecuted for heresy. Gender politics is also far removed from our own, with most humans able to express their sexual identities in multiple ways thanks to genetic engineering.

Similarly, the Mayan sections explore a different sort of morality, particularly sexual morality, to that which we’ d consider traditional today, specifically, in the acceptability of incest within the royal families of the Mayan city states. Byrne handles all of this deftly, without quite slipping into preachiness and her writing style is remarkably clear and easy to follow, despite the bizarreness of the situations she describes.

While clearly hitting all the bases so far as modern ‘issues’ go, from environmentalism to gender roles, Byrne isn’t quite telling a page-turner in terms of drama or tension. All three of the stories are good, but they’re told leisurely with Byrne frequently more interested in providing background details and philosophical reflections than advancing the plot. I was reminded of Norman Mailer’s ‘Ancient Evenings’ when reading this book.

ike ‘The Actual Star’, that novel was one with multiple timelines and, again, involved ideas about reincarnation and destiny. Mailer was, if anything, even more easily side-tracked into the religion and private lives of his protagonists, this time ancient Egyptians in at least two historical periods and a third, more spiritual timeline. Comparing Byrne to Mailer as a writer is probably excessive, but both of them created compelling ‘realities’ into which the reader is immersed.

If one were being harsh, one might observe that ‘The Actual Star’ is somewhat heavyweight for the story being told, with a lot being said but relatively little happening. The final denouement is a mess of experiences, not altogether linear and certainly not clear. The central conceits are, occasionally, self-indulgent and assume the reader buys into them. But ultimately, this is a book to be enjoyed as a statement about the journey of life rather than fantasy fiction.