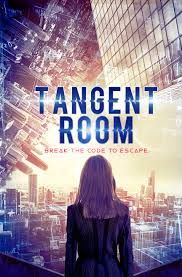 I have heard that when an author writes a ‘Star Trek’ script they are told that for the good of the story they do not have to put in sophisticated-sounding supposedly scientific explanations. Instead they put in the string ‘tech…tech…tech…tech…tech…tech…’ Someone else who knows a little about science or how scientific language feels and sounds will remove the tech line and replace it with something that sounds good, but that does not really mean anything. A new film ‘Tangent Room’ examines the question of what would happen if you got together a solid chunk of rhetorical ‘tech…’ and collided it with an identical mass of home-grown balderdash.

Four scientists, three women and a man, who worked in very different fields of science find themselves in an isolated room. They have no idea how they got there. There does not seem to be any logical connection to their fields of research. We soon learn that what they have in common is that they all work with very strange and generally large numbers. I suppose what I was curious about is what is a ‘strange number? I found out surprisingly that ‘the right numbers can solve any problem’. Soon we discover that the supposedly mind-bending cosmic effects are intended not to be taken seriously (I hope).

It is hard to rate ‘Tangent Room’ entirely fairly. The idea is intriguing, yes, but the plot is too similar to that of Luis Piedrahita and Rodrigo Sopena’s Spanish thriller ‘Fermat’s Room’ (2007). The actual mathematics and physics is wrong and atrocious, but how many viewers are going to know or care about the difference? Then again how often does one find a film built around a mathematical concept. Parts of ‘Tangent Room’ film are whimsically satirical of time paradox films like a ‘Back To The Future’ film.