When Anne Serling, Rod Sterling’s daughter, in the introduction says she’s impressed with the research in Nicholas Parisi’s book, ‘Rod Serling: His Life, Work And Imagination’, then it’s time for some serious reading. Do I have to tell you who Rod Serling is then you need to spend some time in the Twilight Zone, although in his first reference to it, the place in the ‘twilight land’ long before it became a TV series. 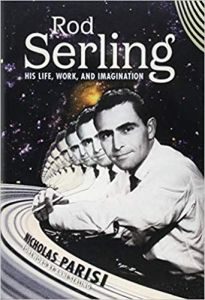 I think the most surprising fact was discovering that Serling was only 5ft 4inches tall as I always saw him as being much taller. His early life was in a small town called Binghampton before being drafted in WW2 and later working in Cincinnati writing advertising copy for the radio while simultaneously sending out stories and scripts and finally selling them.

Parisi points out Serling’s war-time experiences, boxing and understanding of small towns plus a need to have social awareness all contributing to his stories. It’s an interesting point for all you budding writers out there to use your own major interests and experiences in what compels you to write. If you’re short on any of them, then get some under your belt. For subject matter, I find it a lot easier to become more than layman in a variety of subjects doing at least one a year.

Something I wasn’t aware of is that when a ‘story by’ credit is used, it didn’t mean the original writer hadn’t written a script just that it hides the number of rewrites done by other writers on the teleplay. It wasn’t until Serling moved from Cincinnati to New York that he was there to do the rewrites himself.

Likewise, it isn’t actually unusual for scriptwriters to reuse their own scripts or themes over the years and Serling is no exception to this rule as Parisi points out in box out-takes. If you feel surprised by that, always remember, any story idea will find its time. The fact that it can be found time after time shows more about the strength of particular themes.

Don’t think the early Serling had an easy time getting his scripts sold. There were a lot more American TV anthology series back in the 1950s and not all of them were happy showing morality plays of the strength he wrote.

Throughout the book, Parisi gives examples of Serling’s work with plot/synopsises and cast. I found myself focusing on these, looking to see any actors who later became famous names or even used in ‘The Twilight Zone’, which happened from time to time. One interesting one was seeing James Dean in a 1953 TV story. Paul Newman appeared in three films written by Serling.

If you wondered when Serling wrote in our genre, Parisi notes ‘U.F.O.’ from 1954 but points out that it isn’t actually SF and he had written other SF scripts. Mind you, there weren’t many if any SF TV anthologies around back then.

Something that became more apparent as I read is the informative gives about his career and techniques that are still relevant today. For several years, he played within the system, never writing anything too controversial that couldn’t be used. However, that changed in 1955, with two stories ‘The Arena’ and ‘Watching Noon On Doomsday’ which you’ll have to read here on appeasing the sponsors. Oddly and contrary, Serling won awards and adaptations in the UK of ‘A Town Turned To Dust’ (proving a change to a western setting got under the radar) and ‘Requiem For A Heavyweight’.

As such, with the segregation between working in films and TV, Serling’s star rose and he was seen as an important scriptwriter after five years. I also found myself wanting to check some of these stories out and although only a few are available on DVD.

Now here’s something I didn’t know. The first pilot, ‘The Time Element’ for the potential ‘Twilight Zone’ was made for the Desliu Studios when Desi Arnaz took a shine to it. A quick check also reveals only a couple of their Desilu Playhouse stories are available on DVD so I hope someone thinks this one might be worth being released.

Of course, the meat of this book is ‘The Twilight Zone’. Serling never saw himself as a Science Fiction writer because he admits he wasn’t science savvy, so saw himself more as a fantasy writer. However, he realised he could get across important topics in fantastic settings than otherwise and why they haven’t age so much. Looking at how American programme sponsors didn’t want to upset their potential customers resulted in a lot of insipid material. There might have been other scriptwriters wanting to cover social issues but Serling got most of the attention.

With ‘It’s A Good Life’, there is a solution, there was a plan for a 1974 movie with a solution to how to deal with that nice Anthony Fremont boy but I doubt if it would have been allowed.

I think the biggest surprise was to discover that Serling had written a 15 episode western series called ‘The Loner’ (1965), which is available on DVD. Like with ‘The Twilight Zone’, he drew attention to prejudice and also expressed that guns aren’t always the answer and needed better control.

For those wanting more details about his scripting of ‘Planet Of The Apes’ (1968), he explains that only his plot remained as it was re-scripted a few times before being filmed.

It’s rather interesting that when we reach ‘Night Gallery’ that Parisi mentions Cayuga Lake where Serling had his summer home but not mention that he also used it as the name of his production company in ‘The Twilight Zone’. I hadn’t made the connection until now.

With ‘Night Gallery’, Serling had little control of anything, including his own scripts but it did give an upcoming director Steven Spielberg his first break and I wonder what happened to him. This is one series I’ve yet to see and can’t remember it being shown in the UK. By the 1970s, anthology series had lost popularity and I suspect it would have been a tough call to succeed even if did last 3 seasons. Having read the synopsises here and paying attention to the various casts, I think I’ll be considering a look once I complete the last couple seasons of the original ‘Twilight Zone’.

Something that Parisi frequently mentions is how gregarious and how much of a team player Serling was. This is quite a contrast to how writing scripts can be where you have to be pretty insular to get any work done. In his own words, Serling admits that it would be pretty tough for him to sit down to write a novel and I tend to think it would have been fighting his own nature had he done so. It is noted at the end that Serling used a Dictaphone to write his scripts, voicing the various characters with the right emotional tenses which must have been interesting to listen to. He did type when it came to standard stories.

In some respects, the change from anthology TV series finally booted much of Serling’s career but he did keep working, including the odd acting job, adverts and TV quizshows. Finally, what did kill him was his smoking habit.

The appendixes show a lot of information about scripts that were never used. This is the bane of most writers and it’s good to know that Serling suffered from the same malady.

This is a superb book to get into the life of Rodman E. Serling. If you’ve watched the original ‘Twilight Zone’, then this book will make a useful addition to your library of books and its influence on the SF shows of today.