Sometimes in my wanderings, I suddenly come up with an answer without knowing what triggered the question, and then it niggles. Take the second pilot for the original ‘Star Trek’, ‘Where No Man Has Gone Before’ where the USS Enterprise attempts to pass through a barrier at the edge of the galaxy. Although it is documented in later episodes that the second officer, the Vulcan Spock is also telepathic, he is seemingly unaffected.

However, nine crewmen are killed with Lieutenant Gary Mitchell and Doctor Elizabeth Dehner developing advanced psionic abilities that ultimately resulted in their deaths. 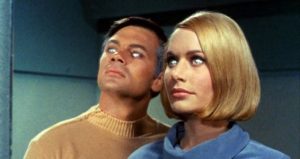 The niggle is that over later episodes, Spock does some extraordinary things that we take for granted as something any Vulcan can do. I mean, he communicates with the alien rock creature, the Horta in ‘The Devil In The Dark’, he feels the astonishment emotions of the 400 deaths of the Vulcan crew of the USS Intrepid in ‘The Immunity Syndrome’. Even with ‘The Menagerie’, you have to ask yourself how the Telosians could contact Spock unless he was looking for a solution to Christopher Pike’s immobility and reached out to them at a distance. Lest we forget, ‘Operation: Annihilate’, Spock survived being attacked by those flying amoebas and even the blindness caused by the ultraviolet rays, albeit with an inner eyelid, but you have to wonder on that one.

The same with ‘The Deadly Years’ and although Spock’s longer life span put him at a slower aging rate compared to the others, he didn’t suffer the senility his father later had. He even survived a double brain transplant in ‘Spock’s Brain’. There is also the act of emotion and breaking Starfleet protocols when he erased his superior officer, James Kirk, of his feelings for the android Rayna Kapec in ‘Requiem For Methuselah’.

They might all seem to be the normal things of a conventional Vulcan and not laid down by any thoughts by any of the various scriptwriters, but since has that stopped any speculation before? With the second and third films, where Spock died and restored to a clone of his own body, the practice of his Katra being transferred to someone else, this time the human Leonard McCoy, was not only successful but restored all his memories. Even the Vulcans who helped the restoration saw it as a rarity than something they could accomplish every time. 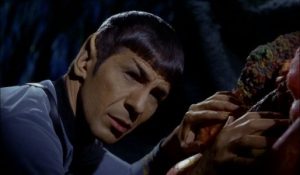 Unlike Mitchell and Denher, both of whom had high psi ratings, they didn’t start with their abilities, Spock already was, and being half-human he would have similar attributes. Just because his eyes didn’t glow silver or develop megalomania tendencies, didn’t mean he wasn’t affected. Much of the Vulcan telepathic ability is markedly different in they have to have physical contact to induce communication.

When combined with Vulcan’s recognised emotional control, one would have to wonder if Spock’s self-control just took it in his stride and mistook one for the other. It is hardly like he continually used his telepathic abilities unless asked. One could almost wonder if his more emotional outbursts over the years was more a reminder of what he was carrying inside was far more than his hybrid combination. The fact that he could reel such emotions in with little ill effect should speak for itself. 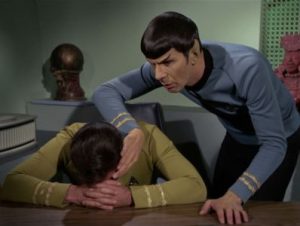 When you compare Spock’s activities compared to full Vulcans such as his father. Sarek, T’Pau, Tuvok, and T’Pol, let alone the Romulans, they rarely did as much with their touch-telepathy. Their Vulcan salute looks like a better choice than to hand-touch mind-read. No wonder they restrict their emotions to prevent the simplest hugging, although sexual intimacy with pon farr appears to be most striking.

Taking this subtext as a whole, would Spock have realised the energy field affected him at the edge of the galaxy? As shown over the years, Spock’s major conflict with himself is his emotional turmoil between his hybrid status. Vulcans are also notoriously reluctant to use their touch telepathic abilities and this discipline would have served him in good stead.

Niggle satisfied and will either get ‘Star Trek’ fans thinking about something they hadn’t considered or at least answer the question why Spock wasn’t affected in ‘Where No Man Has Gone Before’.

I enjoy solving mysteries and it’s all subtext. 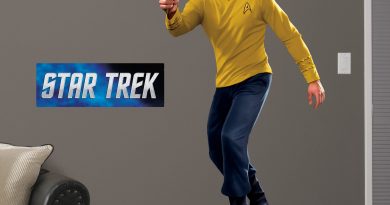 Fathead driving Trekkers up the wall? 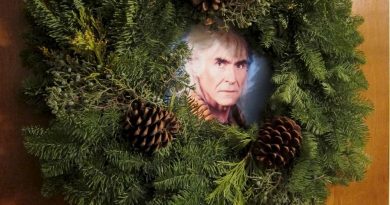 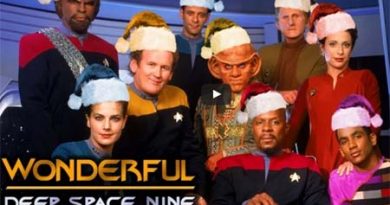