Imagine that the British Empire never faded but expanded into space taking it’s Victorian attitudes with it. Isambard Smith is a product of that environment and very comfortable with its morals and social values. Unfortunately, he’s not a happy chap, having spent a year entering data about asteroids into a computer and having six requests to captain a spaceship turned down. After all, he’s tall with a square jaw (that women should find attractive) and courageous. He deserves to be in space!

Isambard finally gets his chance to become Space Captain Smith when he is given a rust light frighter and told to go and pick up Rhianna Mitchell from the Hippie colony of New Francisco. It is going to take a man with a stiff backbone to deal with all the ‘hop-potting splifftokers and all sorts that the Empire still has to rescue from idleness and free love’. To assist Isambard on this quest, he is assigned the android pilot Polly Carveth who brings along her hamster, Gerald. As we find out, she’s not really a pilot but a renegade sex toy. To complicate things further, on his way to the spaceship, Isambard picks up his close alien friend, Suruk, a Morlock with a nasty habit of chopping peoples heads off.

The story would not be complete without the alien adversaries. Step forward Commander 462 of the ant-like race Ghast, ably supported by the human religious zealots of New Eden. The story is really about Isambard’s quest to pick up Rhianna Mitchell and deliver her to the Empire for safekeeping. It provides a myriad of opportunities for Isambard’s cultural upbringing and Victorian outlook to flounder on difficult moments especially when trying to interact with Rhianna. The comic moments come thick and fast causing me to put the book down on several occasions. The other train passengers were starting to get nervous at my constant giggling but the comic moments have a habit of catching you unawares. I did enjoy this story very much indeed, as light-hearted romp from the days of the empire (but set in space) is just the thing for the bleak mid-winter.

The only downside to this Kindle edition is the poor formatting. There are a number of instances where it appears paragraphs have been squashed together. A following sentence will have nothing to do with the subject or context of the proceeding sentence. This can make things confusing until you start to expect it. The poor formatting should not put people off buying and reading ‘Space Captain Smith’ though. The strength of the story pulls through, as any citizen of the empire would expect. 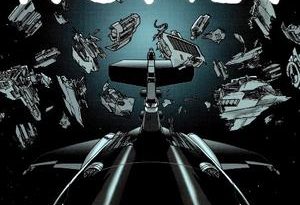 Outbreaks of the Future: The science-fiction comics of Warren Ellis.

Outbreaks of the Future: The science-fiction comics of Warren Ellis.