This may be an intentional play on words but the final segment of the ‘Twilight’ movie series literally bites. Of course avid fans of Stephanie Meyer’s young-adult fiction film franchise devoted to the gooey-eyed goings-on of vampire valentines Edward Cullen (Robert Pattinson) and Bella Swan (Kristen Stewart) may disagree with the not-so-favorable sentiment. Nevertheless the last curtain call for the brooding kissy-poo couple in ‘The Twilight Saga: Breaking Dawn Part 2′ drips with dismissive schmaltz more so than sticky cotton candy residue at a roadside carnival.

The one thing reassuring for young Twi-hard fanatics besides the Edward/Bella romantic collaboration is the result of that collaboration—the arrival of their half vampire/half human daughter Renesmee a.k.a. ‘Nessie’ (Mackenzie Foy). So for all the tormented and tortured tendencies endured by the treasured twosome, an added element of their beloved offspring is thrown into the myopic melodramatic mix.

Curiously, ‘Breaking Dawn’ wants to tap into this fang-friendly family affair in an effort to embellish on the continued popularity of this amorous flesh-bitten fantasy. The question at hand: who are the true ‘suckers’ for benefiting from this angst-ridden teenage tripe — the movie’s youth-oriented vampires or the indiscriminate faithful followers of this moody, drawn-out drama?

Director Bill Condon, who also spearheaded the proceedings in ‘Breaking Dawn Part 1′, is at the helm for this flaccid follow-up. Condon has dutifully created some sumptuous and sophisticated cinema in well-received entries such as ‘Kinsey’, G’ods and Monsters’, ‘Dreamgirls’ and ‘Chicago.’ In ‘Breaking Dawn Part 2′, he conjures up a lifeless and limp exposition that needs a creative comb-over more than a tangled hairy back of a werewolf. The progression of the ‘Twilight’ instalments have gone south and has failed to capture the imaginative sparks and mature momentum that flourished as in the lengthy ‘Harry Potter’ film franchise for instance. Whereas the last ‘Potter’ film in ‘The Deathly Hallows’ had concluded with a breathtaking bang the swan song for ‘Breaking Dawn Part 2′ stumbles into an awkward session of chaotic campiness and CGI mushiness.

As mentioned earlier, Bella has taken on a critical role in motherhood with the birth of Nessie. However, she experiences another kind of birth into vampirism after going through the transitioning of immortal ritualism to combat a complicated childbirth from the previous film’s storyline. In any event, the bottom line is that now Bella and Edward are doting parents yet a deadly duo now bonded in equal powers of free-spirited sex and the savagery of seeking out their blood-stained prey in the unsuspecting wilderness. Bella’s instincts for her targeted sources of bloodthirsty boundaries are running amok and Edward has to control her flesh-finding urges. In short, Bella is getting her groove on as a vampire vixen whose heightened sensation for her extraordinary senses are a radiant rush for her stimulating psyche.

In the meanwhile, Nessie is growing fast and stronger and is within the watchful eye of her protector in Bella’s hunky werewolf buddy Jacob Black (Taylor Lautner). Bella does chide Jacob about giving her daughter a tainted nickname that is closely associated with the Loch Ness Monster (one of the very few lightweight amusing comments to be had in this droll and dull dramatisation).

The existence of Nessie causes some concerns for the Italy-based Volturi (led by Michael Sheen’s Aro), the undead world’s coven of enforcing cynics that keep an eye on suspicious and wayward immortal children deemed ‘dangerous and damaged’ for their cultivated civilizations. In essence, Nessie is considered a potential threat and the Volturi must venture to the Pacific Northwest and destroy the kid in the name of preserving their ancient vampire empire. Whether Nessie is determined an immortal soul or not (remember, she was conceived when her mother Bella was still human) does not seem to matter to the Volturi that is bent on slaughtering first, then asking questions later. Despite witnesses that could attest to her non-immortality status, the verdict remains clear that a bloodbath showdown is brewing over the apocalyptic tug-of-war concerning Edward and Bella’s tyke-in-turmoil.

As push comes to shove, ‘Twilight: Breaking Dawn Part 2′ boils down to a rudimentary rage between the Cullen clan’s vampire associates and Bella’s supportive werewolves versus the judgmental European bloodsuckers looking to cause some hellish havoc in this supernatural sludge. The scope of the film does not match the majestic mayhem one might think would elevate this slightly surreal, costumed soap opera. Over-indulgent in synthetic-looking special effects, wooden acting, screenwriter Melissa Rosenberg’s dim-witted dialogue (Edward’s quip to Bella: ‘We’re the same temperature…you’re a lot stronger now (as) it’s your turn not to break me.’), off-kilter supporting players that do not register both dramatically or comically and an overall mawkishness to the transparent material make for some numbing absurdity.

There was more excitable punch to the real life dalliances involving Pattinson and Stewart in their former tabloid-driven love affair scandal than what is feebly mustered with their flimsy characterizations of Edward and Bella on-screen as their spawn faces her jeopardized outcome. Lautner is not given much to do other than being reduced to posing as a fussy and hairy Neanderthal nursemaid for Nessie. The venomous Volturi bloody brat pack are not eccentric enough to warrant any hedonistic impishness beyond the lavish outfits that they don. Did they invade the closet of a kidnapped fashion designer from Milan before heading to the States to confront the Cullens? 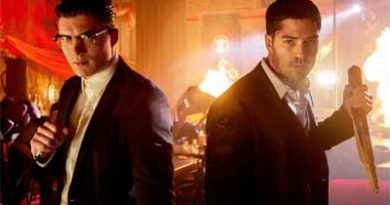 From Dusk Till Dawn series 2 trailer.