Fawcett Comics created their own brand of super-hero in the 1940s. They called him Captain Thunder before thinking Captain Marvellous and ultimately Captain Marvel, affectionately called the Big Red Cheese by his many fans on account of his attire and smile. Although seeing the early strips here, he doesn’t always smile. It’s explained in this book, ‘Shazam! The Golden Age Of The World’s Mightiest Mortal’ written by Chip Kidd and photographer Geoff Spear, that his uniform was loosely based on a military dress uniform of that time period and his arm bands denoting his rank. 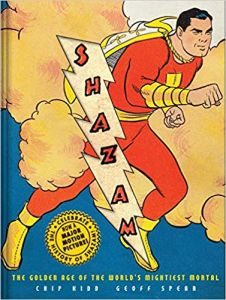 Interestingly 4 of the stories in his first issue of ‘Captain Marvel’s Adventures’ were created by Joe Simon and Jack Kirby, a complete copy of one story is in this book where Captain Marvel faces off again Dr. Sivanna’s new…shall we say…creation, Z, is supposed to be his equal. Reading the story, it does seem odd that Z is left at the bottom of the sea while Captain Marvel surfaces and waits in case he comes up. Had no one thought Z might be drowning?

Through this book there are loads of pictures from the cinema series, which I’ve decided I ought to view now before the new film, and merchandise as well as the comicbooks. Much of it is aged now. It’s rather interesting to discover that the Captain Marvel Fan Club had 40,000 members which surprised the publishers. Like all popular super-hero icons, merchandise of all sorts were endorsed, so it’s hardly surprising that there’s an undercurrent of that here. Rather oddly, there is very little of it left now. I suppose the fans wore it all out playing with them or habitually threw them away when they got older.

As Captain Marvel was far bigger in the USA than over here, the American readers of SFC should check out anything left by their grandparents for any keepsakes because it’s staggering what was and how much was produced. Much of the collectable items photographs here come from the Harry Matetshy collection as well as the odd thing from Chip Kidd’s own collection. I wonder if someone out that will ever compare the amount of merchandise or endorsements for the various super-heroes out there to see whose had the most one day.

Of course, one shouldn’t forget the rest of the family with Captain Marvel, Jr. and Mary Marvel, both of whom got their own comic-books when proved successful. Being junior versions, their appeal was to corner the market for younger readers. I take the authors comment that considering how lame Freddy Freeman was, why didn’t he stay as Captain Marvel, Jr. all the time. I had a think about that and considering the transformation comes with a costume, maybe it was also problematic that it wasn’t removable. By the way, Mac Raboy did a superb painting of Junior’s head shown in this book.

It is rather weird seeing some of the original merchandise hype describing some of it as beautiful. Would young male sprogs think they were the target buyers? Over a few years, the membership of the Captain Marvel Fan Club went up to 200,000 members.

Don’t think this book is all about the Mavel family. We get some insight into ‘Spy Smasher’ and his deeds in WW2 but barely touch on the other Qualitiy characters. I hope the success of this book will encourage about Abrams and the authors to explore them and their merchandise in another book.

In many respects, this book could practically be called a ‘Vault’ type book as you get samples of everything here. Although it only covers the Fawcett Comics, right up to their losing the lawsuit with DC Comics, this will give you a good grounding to go with the coming film about the first version of ‘Captain Marvel’. Be careful with any lightning bolts, just in case the old wizard Shazam thinks you’re related to the Batson family.

Oh, there’s also Hoppy, the Marvel Bunny. What else is there to love?