I’m on the same page or rather book as botanist and teacher author Stanley A. Rice with his book ‘Scientifically Thinking’ because I have a scientific background. You might have noticed that over the years. It’s also rather useful as a Science Fiction writer because even when I play with scientific rules, I still apply cause and effect and all the implications.

If you are writing SF without such a background, you are working at a disadvantage and this book won’t be sitting on your shelf, but looked through on a regular basis to understand the scientific mindset. Really, though, the principles are pretty basic and, once understood, you’ll be applying all the time because they are useful in understanding how the world and beyond works. 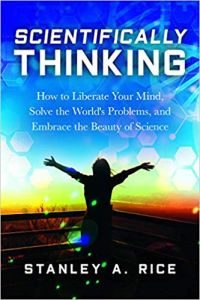 Don’t expect to be given all the scientific rules here. Rice’s intention is to guide you in the way of thinking so you get into the mindset. He starts by explaining that having information or even access to it on the Net isn’t the same as understanding what it means. Think of that as explaining climate change and its implications and how some people struggle to put the present ecological disaster together. Our way of thinking is to understand the past and where it is leading into the future. As Rice points out, the Net is also full of misinformation as well which confuses issues.

He also points out we might have the smartest brains of the animal kingdom but we aren’t very good at using them. Hands up those of you who see other people’s eyes glaze a bit when lost on being told something scientific, even on something like computers. None of which is helped as Rice points out that some people think scientists are people apart from the normal type. I would probably add that there really should be more done at schools to get kids to stay interested and understand science.

Scientists don’t just create a hypothesis to account for a natural phenomenon but have to prove it is the right one and have to dismiss the ones that don’t. I would go one step further that even when you think you have the right hypothesis, you still check to make sure that nothing else fits the facts as well which sounds a lot like how police work should be done. In essence, we work out from proving which hypothesises don’t work or as Rice calls it the null-hypothesis. When you have scientific knowledge, it does become easier to dismiss some of these quickly.

Rice does mention works of fiction in all of this, hence my opening remarks that this is essential reading. Rice draws comparison to Perry Mason is largely because Erle Stanley Gardner contrasts his lawyer for the defence by not jumping to the obvious and his client being guilty and proving otherwise. I think I might comment on that why the police don’t always apply this but instinct doesn’t beat absolute proof. When you throw criminals in who try to perfect their alibis, nothing is ever straightforward.

Don’t expect this book to be a quick read. Rice will give you a lot to think about, even if it might appear to be questionable experimentation on insects, although on some levels it’s no different to what some children probably did when young.

The earliest recorded experiment to prove a hypothesis was Francesco Redi in 1668, proving maggots grew from eggs on rotting meat. I’d go further than that and say Redi also recognised metamorphosis as well. How else would he recognise what came from the eggs. Looking at Rice’s experimentation with light on plants and the problem with heat, I wonder if he’s thought of repeating it using natural light LEDs as they don’t generate as much heat.

If you were ever confused by false positives and positive false results, Rice explains the difference and why all possible outcomes are explored.

Although I understand how so many people rely on two-option choices, I think it doesn’t allow for people like me who are more multi-ordinal orientated and automatically look at all choices as a matter of course. General Semantics really needs a comeback.

Rice’s examination of how we see light is actually very revealing. Last year, artist/reviewer Dave Hardy and I compared results after doing a colour test on-line where we had similar high scores compared what would be called the human ‘norm’. To see more colour hues is our advantage when painting. If you look at a blue sky, count the number of shades you see. If you see more than just a single blue, then you have greater sensitivity to hues. I go further than Rice, in that it isn’t just what wavelengths the eye absorbs and interprets but in how good the brain is in distinguishing what it sees.

Humans have very different levels of sensitivity to what their senses pick up but we’re only used to our own ‘normal’ and think other people are the same as ourselves. We only realise things are different when we compare our perceptions. The sensitivity of the experimenter, let alone any bias which as Rice points out we all have, has to be taken into account with any experiment and tests.

It’s rather interesting where Rice discusses how people used to accept gods doing natural effects, even the sun moving across the sky a lot easier than having to accept the Earth rotating around the sun shows a demonstration of conditioning. Further in, his description of how congregations are told by priest to clear their minds in the church as a demonstration of subtle brainwashing should stop and make you think.

I mean really think than accept blindly what you are told. That might seem contradictory as a lot of things about science isn’t always evident but there is so much you can prove by experimentation yourself. People are also still defined by labels and his example of how slaves were treated as property than human beings shows a lot about how society is so reluctant to change.

Don’t think all of this is straightforward as Rice discusses pseudoscience and how these people use some of scientific rules but without proper research and experimentation and just how much shaky ground they are on. Hardly surprising that this is on the same level as religion where you are told what to believe than allowed to question it. You mind is cleared, remember.

With science, a working hypothesis can be changed if new evidence comes up. Some things, like natural selection and evolution are less likely to change simply because there is so much evidence of proof to back it up. A lot of hypothesises develop when the jigsaw of information isn’t complete. There is also a lot of scientific knowledge that is indisputable.

Although Rice points out American politicians who seem to ignore science, I wish he had explored why they stayed that way. Is it a failure in education or religious attitudes or something else in play here? It’s hardly surprising that political leaders world-wide are seen to attend church which acts as reinforcement to such ideals than scientific thought. That in itself is weird, granted that in the western world the number of people supporting major religions has declining numbers. Oddly, it isn’t because the populations are getting more scientifically orientated but more to do with different needs for their time.

As you can tell by the length of this review, I have a lot to say. Much of the above is agreeing and adding my two pennyworth but only because on some of the subjects I can go into more depth with my own knowledge. Being able to think scientifically is handy. My ability to converse with anyone even more so. This book is about how to have a scientific mindset and if you come away with that working for you then Stanley Rice would have done a good job. Who knows, you might look at science books in a new light.

check out websites: www.prometheusbooks.com and www.stanleyrice.com