A dirt-farmer rancher is just about ready to give up on his drought-stricken farm. The local officials, however, will give him the money he needs to keep his farm alive if, in turn, he will escort a dangerous killer to the train to Yuma prison. The catch is that the killer’s gang is all over the streets of town and they are willing to kill to rescue their leader. Delmer Daves directs Glenn Ford and Van Heflin in a film based on a strong suspenseful story by Elmore Leonard.

Dan Evans (played by Van Hefllin) is currently a rancher whose ranch has been hit by disastrous droughts year after year. If he had just a little cash for water he probably could save his farm, but the sun just keeps beating down killing his farm. 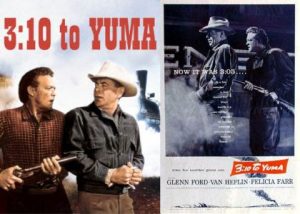 Dan happens onto a stagecoach robbery and he sees a notorious killer kill two men. The killer is mild-mannered Ben Wade (Glenn Ford). Wade is shortly thereafter captured, but the authorities have a problem. Wade has to be taken to the authorities in Yuma. His gang is riding to rescue him and they will kill anyone trying to take Wade to jail. They want to hire someone to take the risk and Evans would find that reward money very useful if he lives long enough. Evans is willing to get himself killed to get the reward money for his family. Wade’s gang want to rescue Ben before the train carries him away to prison. Evans decides to take the job.

Evans wants no part of the notorious killer, but then the rancher finds the outlaw totally unlike what he expected. Ben Wade is amiable, friendly and clearly planning an escape. Evans must figure out the Wade’s game before not knowing gets him killed. Let the games begin.

Dan Evans has chosen to limit himself to a simple life. He would not have to get involved in violent conflicts as long as he could dig his living out of the ground. Now he has found that a quiet farmer’s life is not necessarily peaceful and can lead a man just as well to life and death conflict.

Delmer Davies directed ‘3:10 To Yuma’. Van Heflin plays the killer, Ben Wade is played by Glenn Ford and the rancher, Dan Evans. The film is originally derived from a story published in 1953 authored by Elmore Leonard. Aspects of the story seem to borrow from ‘High Noon’. Rating +3 on the -4 to +4 scale.

The film ‘3:10 To Yuma’ was re-made in 2007. The remake was larger scale and louder and though it was not bad as a western it had lost its personal touch. It is hard to imagine a better Ben Wade than Glenn Ford who had a quiet personal feel to his characters.

I have always been a little amused by the lyrics of the title song. The last nine lines seem to imply that the train has some sort of supernatural hypnotic come-hither power:

There is a lonely train

The pounding of the wheels

There’s a legend and there’s a rumor

You can see the ghosts

Of outlaws go riding by, (riding by)

‘Way up high the buzzards keep circling the train

While below the cattle are thirsting for rain.

A man can meet his faith

‘Though you’ve got no reason to go there

And there ain’t a soul that you know there

When 3:10 to Yuma whistles its sad refrain