Rin lives in a backwater town with adoptive parents who use her as free labour. She knows that the only way to get out of there and make a life of her choosing is to get accepted to the most prestigious military academy in the country, Sinegard. Yet how can she, a poorly educated commoner, hope to compete against the brightest and best of the nobles who have trained for this all their lives? Even if she can overcome the odds to get that far, it might be that the gods have another fate in store for her, a fate that could set the world on fire. 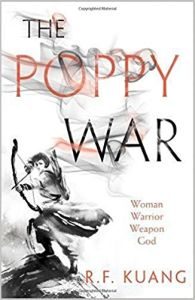 There seems to have been a lot of hype about R. F. Kuang’s debut novel, ‘The Poppy War’, which I’ve seen mentioned on a dozen or more Science Fiction and fantasy threads over the last couple of months. The premise certainly sounds good. Strong female protagonist, gods, politics, magic and warfare in a world that’s something like feudal Japan.

As I started reading it, I was impressed. The story sucked me in within a few pages and I found myself wishing for just a little more reading time every time I had to stop. Rin is a great character who has plenty of flaws to make her relatable but with a lot of qualities to admire and she’s even likeable into the bargain. It was fun to watch her develop as she left her provincial village and moved to the big city to attend military college. The college, Sinegard, also allowed the introduction of a host of interesting characters, my favourite of which was probably Master Jiang, the enigmatic teacher of the even more mysterious subject of Lore. Yet, even while he was one of my favourite characters, Jiang was also probably my biggest annoyance in the book because his story felt so unresolved, abandoned partway through the book with not even a glance back and that was a real shame.

In fact, many of the characters I grew fond of in the first part of the book seemed to disappear as the story progressed and those that remained made some choices and generally behaved in a manner that felt wrong given the way they were built up earlier on in the book. Once I got into part two of the story (it’s split into three parts), it felt a bit like I was reading a completely different book. That’s not to say it wasn’t still good, but I certainly felt that the level dropped from a five star read to a four star read as the onset of war dominated the events.

What I did enjoy was the way the gods and the magic were introduced into the book. It felt like quite a fresh way of looking at these things and integrating the two ideas into one complete theological magic system. It also had a very good portrayal of war, really showing the brutality and hardships of war but never descending into a place that was so bleak I wanted to put the book down. There’s certainly plenty of violence in here, though, so if you don’t like your battles bloody then it might be wise to look elsewhere.

There’s a lot to like about ‘The Poppy War’ and it is certainly an accomplished debut. I’d be very happy to pick up future books from R.F. Kuang and am looking forward to seeing what she comes up with next. I don’t know if ‘The Poppy War’ is intended to be part of a series but there is certainly plenty of scope for more books set in that world and I’d enjoy reading about what happened both after the events of this book and the historical events that are so strongly referenced throughout the novel.