The latest issue of ‘Retro Fan’ focuses on two significant things. The first is that it has moved up to bimonthly status. The other is a look at ‘Charlie’s Angels’. Back in the day, I was a bigger fan of ‘Cagney & Lacey’, but it was the success of the former, which producer Barney Rosenzweig also worked on seeing it as a stepping stone for his own show to get off the ground.

If you want to see a pay inequality, Lee Majors was getting $50,000 per episode of ‘The Six Million Dollar Man’, which his then wife, Farrah Fawcett, was getting only $5,000 per episode on ‘Charlie’s Angels’, both working 12 hour days. They are some surprising insights in the article and it will make you think if the lady stars had been paid more, would they have wanted to do other projects at the same time.

I have to confess that I didn’t really take them seriously because of the famous cardboard cut-out where two of them are clothed and Jaclyn Smith in a bikini. Shouldn’t they have been dressed equally? 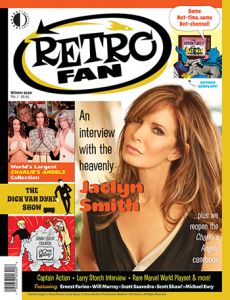 Oddly, the interview with actress Jaclyn Smith focuses more on what she is doing now than on her role in the series.

The look at the Captain Action toy by Mike Eury reminded me how lucky you Americans were. Back then, there were no action figures of super-heroes and here was one that could be dressed as a variety of them. There was only one occasion I ever saw it in a closed toyshop window was when I was young and holidaying with my parents in Aberystwyth in South Wales passing through on a Sunday. The photo showing them all garbed up still looks better than the latter Mego-Toy clothed versions.

Will Murray remembers his interview with Doug Wilden who created the original Jonny Quest, whom Hanna-Barbera never publicly acknowledged. Please reference to other reviews lately of corporations ignoring creators as it appears it’s a common business behaviour in America.

A brief interview by Rose Rummel-Eury with one of her heroes, the 96 year-old actor/voice artist Larry Storch, him of ‘F-Troop’ and many voices.

Then a jump back to ‘Charlie’s Angels’ with Jack Condon going over his collection from when he started. As with all collecting, it might not be something we might collect ourselves but we recognise the passion and the desire for completion. Interestingly, the follow-up article by Scott Saavedra looking at some smaller odd collections will at least reassure you that even our oddest smaller collections are worth having. I hope this is explored more and how hoarders become collectors. If you have a big unusual collection and buy their mag, it gives you the opportunity to show what you have.

Next Ernest Farino has a look at ‘The Dick Van Dyke Show’ which was shown in the UK and still out there on DVD although its blu-ray in only Region A. It stirred up a lot of memories although I think I was a little young for the earliest episodes.

There’s brief piece on streaking in the 1970s but I should only mention that in passing. Mustn’t upset, Ethel.

Something that I’m pretty sure that didn’t come over here was the Marvel World Adventure Playset, made in 1975. AMASCO, who made it, did this for other playsets as well and this one is the rarest. Hardly surprising as kids play with these cardboard cut-outs wore them out.

Scott Shaw!’s look at Batman # 183 where Batman would rather stay home and watch the 1966 TV show is finally explained. It was also part of the transition period when Carmen Infantino was sharpening the dark detective’s look.

A quick look at a celebrity crush, this time of Farrah Fawcett. Then a look at ‘The Land Of Oz’ theme park from 1966 which is now resurrected and opens in the autumn and I’m running out of breathe.

As always, there is a lot of old material packed into each issue and the sales figures shows how successful ‘Retro Fan’ has become, which is an indictment for you to take a look. 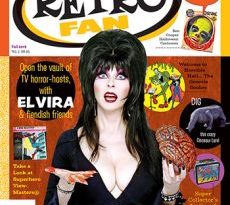 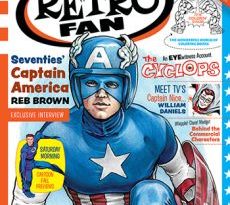 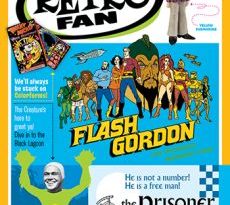