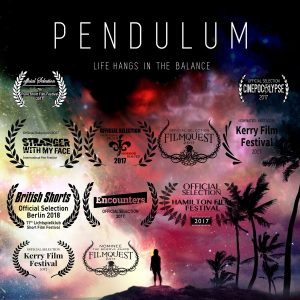 ‘A generation was born knowing the world was going to end in their twenties. Their time is nearly up…’

This small-scale observational study of jeopardised humanity and the vast planetary haven it rests on before the ultimate eradication is quite riveting and introspective given its barely twenty-minute running time presentation. Truthfully, most mainstream movies with bigger budgets and better backing can take a page out of Cooney’s filmmaking book and concoct a probing natural disaster showcase that registers with triggered forethought and mystery. The only begrudging regret about the mystical wonderment of ‘Pendulum’ is that it was served up in a criminally limited cinematic package. However, Cooney’s engaging and thought-provoking doomsday gem packs a prophetic punch for those harbouring the glaring message of her edgy narrative.

Instinctively, Cooney opens up her exposition with the caustic awakening of harsh reality as a bunch of infectiously adorable yet impressionable Indian kids are being told about the seriousness of their endangered fate as the entire world is preparing to collapse before their very eyes. It is a sobering wake-up call for these impacted youths, some uncertain and others very aware, to psychologically register the deadly degree of their global dilemma.

As the dynamic rumblings of thunderous sounds roar within the majestic, patchy purplish-blue skies above India’s earthy landscape it is rather difficult to dismiss the potential massive ruins looking to cease mankind once and for all. Nevertheless, there is a strange kind of awe and beauty taking place for India and perhaps the rest of the world getting caught up in the hype and curiosity of nature’s upcoming destructive wrath.  Sure, the entire world’s ending can both be extremely traumatising as well as tantalising. So why can not the world’s disillusioned citizens be mesmerized and act celebratory about a life-threatening cosmic event that is beyond their control?

Enter Cerys (Cooney). She is an aimless, party-hearty chick that cherishes her smoking and drinking binges. Recklessly drifting apart in many excesses imaginable, Cerys decides to become sensible and numb herself in a different and more beneficial way, traveling to India where she witnesses the televised celebration and spiritual acceptance of the people preparing to meet their Maker. Cerys shares her sudden revelation with hirsute close friend Gwilym (Scott Michael Wagstaff). After all, why spend your last days on Earth in a suffering haze when you can experience a whole new cleansing before your spirit can take you to the next unknown world in your afterlife? Thus, it is off to India for whatever existence of redemption that awaits the sudden consciously aware duo.

Soon, Cerys and Gwilym end up taking residence at an enormously scenic woodsy mountainside where they would join the ranks of a seemingly relaxed and revered commune led by the young dashing leader Derryk (Tom Sawyer). All looks peaceful and proper as Derryk holds court over the soothing festivities of his tranquil flock. Both Cerys and Gwilym partake in the commune’s methodical rituals meant to show meaningful ways in welcoming the inevitable chaos to the world’s ominous ending. The friends are assured that they are in good company with contented people awaiting the calling to doom and gloom.

Naturally, things start to seem too good to be true for the tricked tandem. Apparently, Cerys and Gwilym may have unwisely let their guard down too much at the commune. The hypnotised Gwilym is seduced by an attractive vixen much to the dismayed viewing from Cerys. Moments later, the seedy Derryk does his best to deflower Cerys in the darkened woods but to no avail. Eventually, the couple realises the intrusive shadiness of the deceptive Derryk and how his questionable methods are disrupting the clueless commune falling for his fatal fraudulence. The question posed is this: what is more sinister at large: the entire world’s reckoning of ruination or the man-made tendencies of misguided mayhem as represented by a diabolical Derryk?

Can Cerys and a newly shaven Gwilym, facially cleansed along with his tattered soul from his unassuming association with the commune, withstand the simultaneous devastation caused by both mother nature’s intense fury and human nature’s abnormality in a dark Derryk?

‘Pendulum’ has a motivating messaging about a variety of matters that it touches bracingly with noteworthy insight. This powered SF short film resonates as it crackles with an adventurous script, fully realised performances and flows with directorial conviction. The picturesque production is vividly exquisite. Also, the imaginative foundation of peril in contrast to the rapture-like excitement and anxieties experienced by the on-screen denizens are both surreal and stimulating. The underlying overtones articulated about humanity harbouring its own kind of inherent self-destruction outside of bleak natural forces is artfully reinforced by Cooney’s personal truth. Perhaps we as a global society are our own worst enemies? Does it really take a planetary punishment such as the ending of the world for humans to grasp salvation, express togetherness in heavy-handed hostility and cling to worthy spirited highs when life hangs in the balance as the film profoundly speculates?

Highly gripping and intuitive, ‘Pendulum’ works on the wandering psyche in its minuscule screen time allotment. 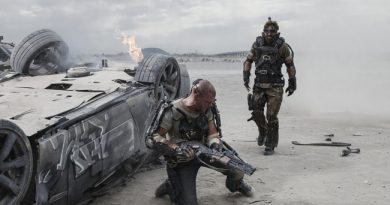 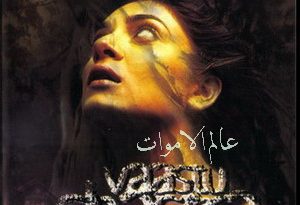