I always look forward to receiving the ‘Jack Kirby Collector’ and this one had an extra feature. Half of it was printed upside down! Which half depends on how you pick it up. I read 47 pages and came to a double page spread, after which there were another 47 pages the other way up. It didn’t matter because I skilfully inverted it and carried on reading. 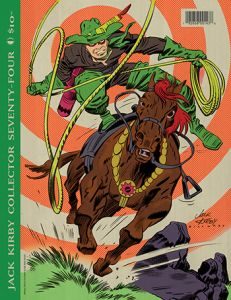 The highlight of Jack Kirby Collector # 74 is a long interview with Roy Thomas or Houseroy as he was shown in Mister Miracle # 6, also featuring Stan Lee as Funky Flashman. Roy shrugs it off but said Stan was hurt. I won’t give away any secrets because there aren’t any at this late date. Roy is a good interviewee because he was there in the mid-1960s and saw firsthand what happened at Marvel. He didn’t see an awful lot of Jack but the freelancers tended to gather on Friday afternoons when they bought their work in and go for lunch. The other reason Roy Thomas is a good source is that he’s not a Kirby fanatic. He’s a Kirby fan, certainly, but not of the crazy ‘Rah! Rah! Jack was perfect! school’. There are some insightful comments. Of course, there’s plenty of other stuff, too.

‘To Pulp Returnest’ is a conversation with graphic biographer Tom Scioli, conducted by Adam McGovern. Scioli is doing Kirby’s biography in graphic novel style. In the past, his art has included a homage to Kirby. I’ve seen a few issues of ‘Godland’ in which Scioli emulates later Kirby with huge figures, thick lines and lots of squiggles and blobby shadows. However, that is not all he can do as a few sample pages of his Kirby biography show. The interview is enlightening and the book may be, too, when it’s finished. As Scioli says it’s ‘the definitive story of his life in the medium that was his own.’

Dwight Boyd writes an article about the Two-Gun Kid and the Rawhide Kid, a pair of darn-tootin’ consarn heroes of the west who did okay in their day. I’m just old enough to remember when the TV schedules were full of cowboys: ‘Bonanza’, ‘The Virginian’, ‘The High Chaparral’ and so on, good stories that were not at all like the real wild west. This piece is a combination of plot summaries and comment which concludes by lamenting the demise of the decent western hero. I’m inclined to agree but, nowadays, you can see them all on cable and satellite in perpetuity, which is quite a long time.

In a similar vein, ‘Hiding In Plain Sight’ by Rand Hope, director of the Jack Kirby Museum, reveals that Kirby ghosted the Davy Crockett strip which ran in some newspapers. The art examples are definitely Kirby but too small to really appreciate.

In the regular ‘Kirby Obscura’ column, Barry Forshaw studies lost treasures by Kirby. This month, it’s stories from My Greatest Adventure # 15, an anthology title published by DC in 1957. The samples show off Kirby’s talent for robots and aliens that looked better than anyone else’s. I’m inclined to agree with Barry that his job of studying 1950s and early 1960s Kirby is easy because there are no bum notes in that work or very few. Of course, even Kirby’s bum notes have a certain odd appeal.

In ‘Star Children And New Seeds’, John Misselthorn writes about Jack Kirby’s interpretation of Arthur C. Clarke and Stanley Kubrick’s film ‘2001: A Space Odyssey’. This includes an explanation of what the film was about, useful for those of us who don’t know, and explains how Kirby ran with the theme. Essentially, the theme is the evolution of humanity into new forms, potentially beings of pure energy in some distant future. If you ask me, we’re a lot closer to those monkeys at the start of the film and seem to be stuck there. Reading Kirby’s ‘2001’ riffs as a spotty teen-ager, I was both baffled and fascinated. It had to mean something but what? Like all exercises in obscurity, it at least gives academics something to disagree about.

Herein, too, is the usual convention transcript with Mark Evanier and guests, then another study of ‘Kirby Kinetics’ by Norris Burroughs, this time using examples from ‘Captain Victory’ and a little piece about nerds in Kirby comics. As usual, there is loads of Kirby art.

This is a pretty standard issue of the ‘Jack Kirby Collector’ and, as always, has insights fans will like. Next issue looks very interesting. A double-sized giant entitled ‘Stuf’ Said’ as it tells the history of the creation of Marvel Comics using the creators own words, pulled from fanzine, magazine, television and radio interviews. Stan and Jack feature obviously but so do Steve Ditko, Wallace Wood and John Romita, Sr. I look forward to it.