‘Monster Nation’ is the follow-up book to ‘Monster Island’ in which, after a zombie apocalypse, a man came to New York from Africa trying to get HIV medicine to save a dictator who had his daughter hostage. In ‘Monster Island’, the United States was already overrun by zombies and ‘Monster Nation’ traces the origins of the epidemic, so it’s a prequel, but not far ahead in time. 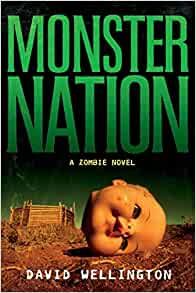 There are no chapters. Instead, the book is broken up by paragraphs in bold print from various newspapers, public notices and wire services which let the reader know what’s happening in the wider world. For the main story, author David Wellington uses the tried and tested technique of following a number of characters whose lives become interconnected. The principal ones here are Nilla, a zombie with brains, and Captain Bannerman Clark of the National Guard in Colorado. Nilla is attacked and bitten by a zombie but runs into an oxygen bar, luckily for her. As established in the previous book, zombies are really stupid because the brain gets no oxygen between their death and revival as undead. By plugging into an oxygen supply, Nilla wakes up undead with intelligence, though no memory of her own life, not even her name. She takes the name Nilla as a joke, as not being really there.

Captain Bannerman Clark is an ex-soldier who has seen combat but is now a high-ranking officer in the National Guard. He is meticulous and organised, some might say anal, but efficient, too, with a strong sense of duty and a knack for inspiring loyalty in his troops. He’s called to Florence Supermax prison, located south of Colorado Springs, because a strange disease has broken out there which seems to make people eat each other and the staff don’t know what to do. The governor has just left for a vacation in California via connecting flights at two busy international airports, thus helping to spread the zombie plague.

There’s a third character, Dick Walters, a government livestock inspector who gets infected while investigating some sort of outbreak among sheep in Rocky Mountain National Park. Dick ends up as a true grotesque and will be great fun if they ever make a B-Movie out of this book. His fate was rather like that of Prime Minister Margaret Thatcher when former Chancellor Geoffrey Howe verbally attacked her in the House of Commons.

The zombie infection takes hold in various western towns and Captain Bannerman Clark does his best to discover the source and stop the spread. Nilla is obsessed with finding her name but is given a new purpose by an ancient Celt with magic powers who caused trouble in ‘Monster Island’. Like all good thriller writers, Wellington seems familiar with the various organisations in the military-industrial complex, as well as those ready to fight pandemics. A Washington bureaucrat brings some sleaze to the mix.

As with the first book, this is essentially a load of codswallop that is good fun to read. Pure escapism. Wellington writes clearly rather than poetically but has his moments now and then describing bits of America’s beautiful scenery. The main characters are well drawn and I especially liked Captain Bannerman Clark, the old-fashioned virtuous man trying to do his best. You eventually do find the cause of the zombie epidemic and it’s not what you might expect or who, for that matter. ‘Monster Nation’ falls firmly into the category of good trash and I expect to enjoy the third and final volume, ‘Monster World’. These sorts of books are a guilty pleasure. Really, one should be improving the mind with some Conrad, Wolfe or dear, dear Jane Austen. Maybe next year. 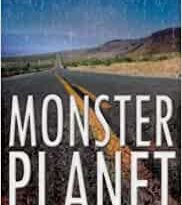 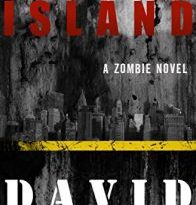