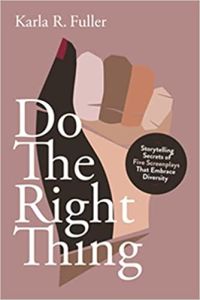 From my writer perspective, I’m here to look at how it can be applied to regular fiction and our genre. The adage ‘write what you know’ also applies to culture. Unless you live within a certain culture, all the research in the world will fake you out if you get things wrong. That doesn’t mean writers can’t touch on diverse subjects but that’s all they really do. For the reader looking for something closer to their culture, whether its colour or sexual orientation, they are more likely to pick authors akin to their subjects. Oddly, I have no problems with colour orientation but I suspect sexual orientation books differing to your normal preferences would be deemed more questionable if you aren’t that way inclined.

The second which is a horror film, ‘Get Out’ (2017), I have seen, although I think with a little tinkering it wouldn’t matter what colour the lead character was. Even so, there aren’t many horror films with coloured leads and it is worth seeing.

Oddly, Fuller’s discussion on having two lead characters with different agendas or journeys being hard to write, yet her examples are some of the best well-known films. With her next film, ‘Roma’, it ends up being essential for any romance film.

When you apply any racial or sexual differences, readers expect it to be applied within the story where its on film or paper. If it isn’t, it tends to be glossed over. You might see an approach to it in the dialogue but that is often used to differentiate between different characters. It worked out much better with coloured than oriental, simply because of some expectation of the language, especially in America. Fuller notes with one book adaption the colour of the writer but not with the others.

We would have to explore the blaxploitation films for how many were written by people of colour. Don’t forget, the original 1971 ‘Shaft’ film was co-written by Ernest Tidyman, a white Jew, you couldn’t get further removed from a man of colour writing it. His co-writer John D.F. Black wasn’t neither. It doesn’t show how much research they did or lived in the culture. I raise that point simply as a counter-argument to Fuller in that colour or sexual orientation isn’t necessarily an argument for a writer not to consider utilising them in a story but you need to get the proper research done.

I wish Fuller had explored her arguments beyond these films, not to mention whether the film studios would want to do such films. The biggest stumbling block is invariably whether they think the film will have a niche market or catch the bigger population, not only in cinema release but also in DVD or TV sales. Seasoned scriptwriters have a better chance of getting their screenplay seen than scriptwriters on the way up. Even then, it can still take years to get out and cultural changes can still happen in the meantime.

Fuller has made the opening take on this subject, but it definitely needs more, and some notes as to how to be aware of what needs to be acknowledged when used in a story.