There are a lot of books about the British secret services, several by Nigel West himself. This book, ‘MI5: British Security Service Operations 1909-1945’ focuses on the creation of the Security Service’ more commonly called MI5 and how it had to overcome low budgets with good results as wars loomed in the early 20th century. Interestingly, they saw Russia a bigger spy threat than Germany. West makes a good point in his introduction that MI5 personal are officers not spies or agents.

Those titles belong to the people they use. Useful nomenclature if you want to if you’re writing a story. You’ll also be surprised at how vague the original Official Secrets Act originally was and how lenient the original sentencing was when caught. Of course, that changed with war-time where most spies were hung unless they changed sides. 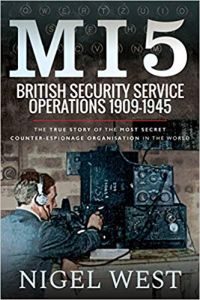 It’s rather interesting seeing references to the five double-agents in MI5 before they were found out. West cleverly keeps it in historical context so it’s more like spotting them as they appeared. In the final chapter, West does explore them. I suspect there will be a post-WW2 book on MI5 activities from publisher Pen & Sword at some point.

Much of this book is devoted to case histories and how MI5 officers worked double-agents in sending the wrong information to the Germans by radio. Even odd absences, caused by accidents, were used to ensure more funding was supplied and went into MI5 coffers. I did think all German spies were caught but two weren’t but as they didn’t produce any useful information to their masters, it’s hardly a blemished records.

Rather paradoxically, despite there being a glossary of abbreviations at the front of the boo, I couldn’t find out what BCRA was on page232 but think West got it the wrong way around in the glossary calling the French Resistance ‘BRCA’.

There is also a look at Gibraltar and Ireland. With Gibraltar, its importance grew as it became the gateway into the Mediterranean and intelligence there was importance. I was surprised at how active the IRA was pre-WW2 and the Germans in them as potential allies before backing away. Russia, as an ally, was watched but little done about any of their activities.

This is an intense read showing MI5’s ingenuity, especially acting on information received. You do need to have some knowledge of British culture from that time period and how we reacted to not disclosing information and checking on suspicious people. Careless talk costs lives and with many off-spring away at war, those that were left obeyed this religiously. The German spies themselves gave themselves away by their equipment and carrying a two-way radio was practically mandatory and many of them were willing to quickly surrender.

Although there is little spycraft given here, Nigel West displays how much counter-espionage measures takes legwork, understanding and manipulating people. As I’ve pointed out before, SF and espionage are different but complementary bedfellows. With this book, West also fills in a lot of gaps in my own knowledge making this a useful history volume. 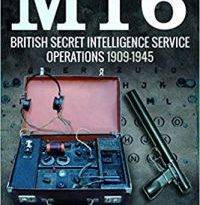