Based on an autobiography by actor Errol Flynn (‘Captain Blood’, ‘The Sea Hawk’, ‘The Dawn Patrol’), ‘In Like Flynn’ tells the story of an adventure shared by Flynn and three friends, searching for gold. The four have varying views of what their worldviews should be. The pacing is uneven, but the film still has some philosophical heft. Directed by: Russell Mulcahy; written by: Marc Furmie, Corey Large, Steve Albert and Luke Flynn. 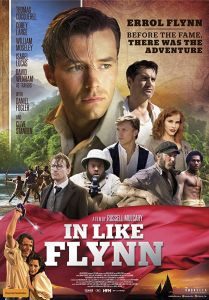 In the 1940s, the most famous and popular lead actor for action and adventure films was Errol Flynn. But Flynn was not in films until he was 29. In the years up to that time, he bounced around New Guinea and Australia as a land speculator, a gold hunter, a card-cheat and a prizefighter. How he avoided scarring that famous pretty face is unclear. At times he stole from his employers and saw some life on the sea. ‘In Like Flynn’ is a screen adaption of his first novel, ‘Beam Ends’, based upon his pre-acting life of adventures.

The novel ‘Beam Ends’ Flynn claimed was ‘mostly’ authentic, but allowed himself to stretch the truth and not disappoint his fans. It is still being read today and it formed the basis of ‘In Like Flynn’, directed by Russell Mulcahy. A ship is on her beam-ends when she has heeled over such that the beams are vertical and she cannot be brought back to an upright position. Similarly, Flynn had the sort of spirit that refuses to be dominated, even on a path to self-destruction.

The film opens like an Indiana Jones movie. It is 1940 and in Papua New Guinea, Flynn and a small camera crew are in the jungle. Flynn is probably helping with location hunting for jungle settings. It seems the local native population is not happy about uninvited visitors.

Mulcahy knows to catch his audience early in the film. He puts his most exciting storytelling at the very beginning. Most of the rest of the film is not nearly as exciting, though there are extended sequences of Flynn boxing and street fighting. It is almost a pity that after the opening chase, the camera follows Flynn and the filmmakers and not the local residents. Almost every scene seems to involve Flynn getting into a fight. The third fight we see is a prizefight. Later, to get out of prizefighting, he steals a boat and with three other gold hunters he goes off to follow a rumor of where gold can be found.

One of the people I saw the film with had a suggestion and a request that the film be sub-titled. Not all Americans appreciate and understand a fine Australian accent and prefer to have the diction a little easier to comprehend.