‘The Only Living Boy Omnibus’, written by David Gallaher and illustrated by Steve Ellis features the entire saga collected into one magnificent edition in full colour and an extra twenty-page story to boot. I had never heard of it until now and so approached it with an open mind. My open mind was soon filled with wonder. 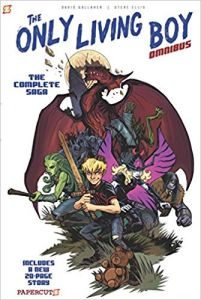 The story begins when twelve years old Erik Farrell runs away from home because it’s not the life he wants and he’s had enough. It rains and the only shelter is in a park under a big rock. There’s a teddy bear backpack lying there for company. Erik goes to sleep and wakes up in another world!

He’s attacked by bat-eared demons called Alku. Climbing a lofty peak to escape them, he sees a huge dragon in the distance, curled around a tower. In shock, he falls back to the forest and encounters a green lady with pointy ears and a staff, a wooden stick for fighting, that is, not a group of employees. She’s Morgan Dwar of the Mermidonians and she’s hunting Alku. She loses. Morgan and Erik are captured and taken to the lair of Doctor Once, a man interested in the science of Sectaurian, trans-species evolution. He throws a Sectaurian princess in the cell next to Erik. Then they all have to fight in the arena but manage to escape.

A boy from our time transported to a fantastic secondary world. A princess who must be rescued. An evil dragon lord. Ho-hum, you say? I say thee nay! I say thee nay because there’s a lot more to it than that and I was strongly reminded of Jack Kirby’s Asgardian tales of yore. In his travels across Chimerika, a world constructed from the most dangerous bits of other planets, Erik meets three different races, who have so far escaped the clutches of the evil dragon lord Balikar. The Groundlings hide in subterranean lairs. The Mermidonians skulk below the sea and the hive society of the Sectaurians floats high in the sky.

As Erik’s travels take him to their varied habitations, the reader gets to meet several important characters. Erik is the only living boy because he’s the last human on the planet. So far, the three races have simply been hiding from Balikar but now the time has come to fight. It’s interesting that, once you get acquainted with it, the background is more super-Science Fiction than fantasy despite the myth-inspired appearance of various characters.

Gallaher has written a terrific adventure story, with a surprising big reveal in the middle which ties it in to Erik’s past life on Earth. The art by Ellis is wonderful, a modern take on Jack Kirby with all the power and dynamism and beautiful design the late maestro brought to the page. Kirby went for chunky and angular but Ellis varies the look with hints of Craig Russell’s more fluid work in the Mermidonian scenes. I was also reminded of Walt Simonson’s ‘Thor’ and ‘New Gods’ pages. Until now, Simonson was the only artist who really captured the spirit of Kirby without copying the surface look but Ellis does it just as well.

The paperback book itself is a worthy artefact, printed on good quality paper and bound so that it’s easy to read. According to a blurb on the back cover, accompanied by snippets from several rave reviews, it’s been nominated for four Harvey Awards and I’m not surprised. Good clean, inspiring fun for children of all ages. I really liked it.