This is the second book in ‘The Imager Portfolio’ series. Like the first, it is set in the city of L’Execlsis in the country of Solidar. The technology is at about the level of Victorian England, the main methods of transport being horse-drawn cabs and railways. The latter are mostly used for freight. Society is well-organised and hierarchical with very wealthy landowners High Holders at the top, Merchants and manufacturers rising in importance, working folks and slum dwellers called Taudis at the bottom. The Collegium Imago – the College of Imagers – is a power in the land but by no means the only one and they have to tread carefully.

Imagers can manipulate matter with their minds and ‘image’ into existence objects that were not there before, albeit with a cost in energy and a cost, too, for the surrounding matter. They can do this over a limited distance so, for example, image caustic soda into the eyes of someone shooting at them. Some can also image force fields to use as shields and make themselves invisible.

After the events of ‘Imager’, our hero, Rhennthyl, is promoted. He will now be the liaison between the Imager Collegium and the Civic Patrol, essentially the police force of L’Excelsis. The officers in the Patrol don’t like him but he fares better on the streets with the ordinary cops. Rhenn has made a deadly enemy in High Holder Ryel, one of the most powerful men in Solidar. Certain slum leaders, called Taudischefs, are also out to get him but one is his friend, more or less. His girl-friend, Seliora, and her family are also strong allies. They are furniture manufacturers who made it out of the slums but still have some useful contacts therein. The College of Imagers, to which Rhenn belongs, seems mostly interested in keeping him quiet to avoid trouble with the High Holders and the Council. Not much support there. The plot proceeds at Mister Modesitt’s usual steady pace. Rhenn’s daily life is narrated: his early morning runs, his meals, his patrols, his meetings with his girl-friend: everything. Meals are lovingly described and, every time he meets Seliora, we learn what she is wearing today. We are also privy to his own thoughts via the medium of first person narration. Over the course of many pages, the reader is drawn into the life of the protagonist and wants to know how it all turns out.

It is not flashy storytelling but it works and is even enjoyable. Modesitt is fantasy’s Anthony Trollope whose work was once described by Nathaniel Hawthorne as ‘solid fare, like beef and potatoes’. The author’s heroes are decent hard-headed chaps – hard hearted, too, when necessary – with magic powers. Their friends are ordinary people. Modesitt had a career in politics and is much concerned with how a society works economically and politically. He gives the novels a very realistic background and it is this solid under-pinning that makes his work different from most other fantasies. Stylistically, he is slightly too fond of tags to avoid the ‘he said, she said’ trap but not to any jarring extent. His usual alternative is ‘I offered’ and ‘he returned’. James Blish would have him boiled in oil but I don’t really mind. The book is written in very clear prose and reading it induces a state of mild contentment. Like eating meat and potatoes really.

There aren’t too many surprises in the plot because as we follow Rhenn’s thoughts, it isn’t too hard to guess what he might do next. However, when he is surprised we are, too. This is notable when he gets some idea of how other people see him. There is also a nice revelation right at the end of the book.

I spend a lot of time reviewing short stories, where one is thrown into a strange world for a few pages and then, with the next story, taken into one entirely different. For me, it is nice, cosy even, to settle into one well-wrought fantasy world for a hundred thousand words or so of easy, pleasant reading. Judging by the popularity of Modesitt’s many books, I am not alone.

check out websites: www.tor-forge.com and www.lemodesittjr.com/ 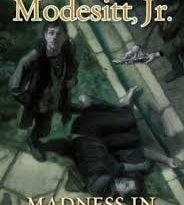