Bounty Hunter Johnny Alpha isn’t alone for long. His latest partner isn’t one whom he would choose neither. Another Strontium Dog or rather, as she prefers, Strontium Bitch, by the name of Durham Red. Her particular, shall we say, affliction is that she has a taste for blood and with a set of fangs, is probably the closest thing to a vampire. The two of them team up and go to the planet Kaiak in pursuit of kidnappers. Their hostage, plucked from our time period, is President Ronald Reagan, and their demand is for all the humans to leave their world.

It won’t be a spoiler to say that they rescue Reagan, but Johnny has some sympathy for his fellow mutants and they’ll hold onto the President until they get their demands. Writer John Wagner must have had a wonderful time writing Reagan because he really is the butt of his humour although whether today’s generation will recognise the jokes is a little debatable. ‘The Royal Affair’ has King Clarkie determined to follow his heart and marry a former housemaid, Vera Duckworth, who rather…er…fits the bill so to speak because she’s also a mutie. This story lets writer John Wagner loose on the upper classes, royal protocol and put it all in a future setting. It’s also unusual in that the Strontium Dogs aren’t bounty hunting but protecting King Clarkie and his bride and is nicely played out.

Artist Colin Macneil takes over the art chores for ‘A Sorry Case’ and Johnny Alpha is hired to take a forever apologetic man to the spaceport, only to discover he’s a bad luck jinx. A disaster for Johnny but a joy watching the various sight gags. You’ll be glad that you’re so lucky compared to him.

‘The Rammy’ is now something that is becoming a little more commonplace in our current reality, where a sting is arranged to attract wanted criminals. This wasn’t originally Johnny’s case and was brought in by Middenface McNaulty and comes up with the sting. Essentially, to get the criminals out of a safe haven on the planet Marbellas (a name similarity to the place in Spain is obviously deliberate) to get them into a place where they could be picked up by offering a price fight brawl. Normally, you would expect it to be played live. Not here. Instead, it is seen as a series of flashbacks as Middenface and Johnny are in court explaining their actions and doubling the humour.

‘The Stone Killers’ has Johnny forcibly teamed up with Durham Red to track down a team of assassins who’ve been killing other Strontium Dogs with some startling revelations. This is another epic long tale but as it splits into mini-tales, you’re dragged along so ensure you give yourself plenty of time to read in one sitting.

Likewise, ‘The No-Go Job’, with art by Simon Harrison, where Johnny Alpha leads a team of Strontium Dogs and a priest to rescue a Bishop and some relics on the Feud World, which lives up to its title and becomes a pure combat zone.

Whatever, ‘having another run of ‘Strontium Dog’ tales makes for an good read of one of my favourite ‘2000AD’ characters and well worth you seeing if you become as hooked as I am. Unlike the Judge fella, Johnny Alpha does have a sense of humour about his work and, oddly, a better sense of justice for his own people. 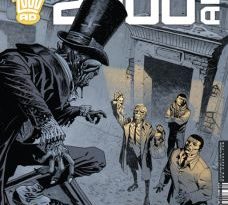 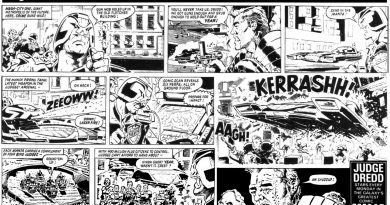 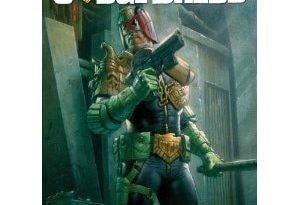