The aptly named idiotic action-packed romancer Hit & Run feels just like its movie title suggests. The engine-driven actioner forcefully slugs the audience over the head with its empty-headed hedonism that is relentlessly pointless and recycled nonsense. Erratic, baseless and tediously conceived, this cockeyed car chase caper runs on lowbrow fuel while it routinely revs up to silly-minded shenanigans that is best suited for a hyperactive hamster race in an enclosed cage.

Co-directors Dax Shepard (from TV’s “Parenthood”) and David Palmer uneventfully tag team on presenting this gas-guzzling dud that obviously aims to basking in its pseudo-coolness of fast vehicles, love-on-the-lam high jinx and kooky characters with shady exaggerated motives. Clearly, Hit & Run looks to celebrate the guilty pleasure ramblings of the “burn rubber” genre that range from yesteryear’s Bullit and Smoky and the Bandit to contemporary autoerotic ditties such as Drive, Gone in 60 Seconds or the popular The Fast and the Furious film franchise. Unfortunately, the sketchy contrivance behind Hit & Run makes this chaotic car fable just as appetizing as gargling with motor oil.

The arbitrary story centers on former getaway driver Charlie Bronson/a.k.a. Yul Perrkins (Dax Shepard) whose escape from the Witness Protection Program is based upon the impulsive gesture of escorting his sociology professor girlfriend Annie Bean (Shepard’s real life love interest Kristen Bell, “Forgetting Sarah Marshall”) from the sleepy-eyed quaint California community of Milton Valley to the hustle and bustle of Los Angeles. In LA Annie has a promising job offer waiting for her as a head honcho of an anger management facility.

Of course the comedic complications ensue as Charlie tries to guard his true identity from not only his galpal Annie but from other notorious associates that want his head on a shingle. Inevitably, Charlie is exposed and soon the romantic tandem furiously weaves in and out of sticky situations en route to their desired destination. Between Charlie’s shifty maneuvering in his 1967 black Lincoln Continental and Annie’s gift for calm reasoning the couple tries to stay one step ahead of their determined tormentors.

So the predictable chase is on as fleeing lovebirds Charlie and Annie must avoid the clutches of law enforcers and prior bad news associates alike. On the right side of the law trying to track down the cruising couple is the bumbling ineptitude of U.S. Marshal Randy Anson (comedian Tom Arnold). Also, Charlie’s dreadlocked ex-partner-in-crime bank robber Alexis (Bradley Cooper, “The A-Team”, “The Hangover 2”) is looking to get even as Charlie turned state’s evidence against him landing the vengeful Alexis some serious jail time. Obviously Alexis and his other riff raffish cohorts want to settle the score with sellout Charlie.

Shepard, who wears many hats as the movie’s star-director-writer, stuffs his scattershot script with the tired clichéd flourishes of aimless banter, paper thin eccentrics mugging their way through lukewarm lunacy and the conventional kookiness of a transparent on-the-road action adventure that we have experienced many countless times over. The romantic repartee between Shepard and Bell is occasionally inspired in cheekiness but that is not enough to compensate for the stilted scenes of the so-called throwaway ribaldry that is as reliable as bald radial tires on your Aunt Martha’s Ford Pinto.

The real scene stealer is the souped-up vehicle that Charlie and Annie travel in as they hop from one location to another. Reportedly, Shepard is an automobile enthusiast and he ensures that we revel in the lyrical montages of cars peeling out aggressively on the dusty roads while being set to the accompaniment of a vintage 70’s soundtrack to enhance the boisterous tone. Unfortunately, the gesture of worshipping whirling wheels overshadows the movie’s lack of wayward witticism or watered down off-kilter excitement of its human co-stars. Surprisingly, the car chase sequences seem tame for an octane-induced thriller that invites us to sniff up the flaccid fumes.

The supporting players are paraded in and out of this traction-challenged farce that merely comes off as an annoying gimmick. Tom Arnold’s klutzy lawman grates on the nerves. Cooper’s reggae-looking ruffian is cause to roll one’s eyes in a desperate plea for fleeting, irreverent chuckles. Rounding out the banal bunch is Joy Bryant as the woman that had romantic links with both bad boys Charlie and Alex. Veteran actor Beau Bridges plays Charlie’s insufferable father while Emmy-winner Kristen Chenoweth toils as Annie’s substance abusing boss. Annie’s ex-boyfriend (Michael Rosenbaum) seethes with envy as he is attached to the hip of his gay cop brother (Jess Rowland).

Consequently, Hit & Run is indeed a car accident in every sense of the word. 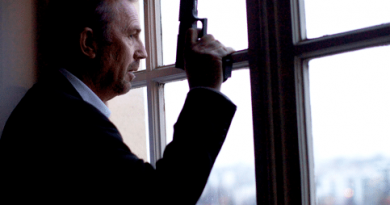 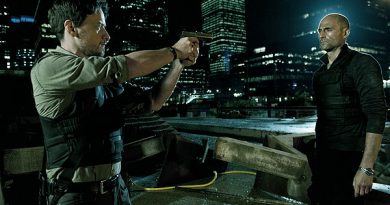