‘Girl Warriors’ by Svenja Hohenstein actually only focuses on three: Buffy Summers obviously from the 1997-2003 TV series, Katniss Everdeen from ‘The Hunger Games’ (2008-2010) novels and Princess Merida from Disney’s 2012 film ‘Brave’. As you’ll tell from this review, I’m reacting a lot to what she has to say. 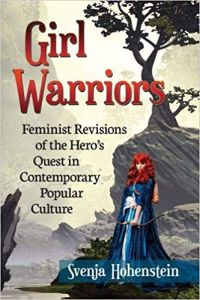 From the introduction, Hohenstein says there is also some emphasis on third wave feminism where the ladies are more politically active. ‘Politically’ is not in terms of real life politics and not too sure on that in context or on ‘girl power’ but at least it gives her stance. Oddly, Buffy’s creator Joss Whedon is only mentioned in the introduction and not in the chapter about her, although he does get a bigger mention in the final chapter but primarily about him writing strong female characters. From interviews I’ve read, Whedon has pointed out that his creation of Buffy was more to do with reversing stereotypes and not doing what is expected.

The transposition from film to TV series did that in the pilot episode when the girl turned out to be the vampire when she attacked the boy. Oddly, with the opening Buffy chapter, there is no examination of the episodes written by Whedon compared to those by his female scriptwriters which would surely have demonstrated more about who had feminist ideals incorporated into the stories. This always has a basis in any story as to what is incorporated into any reality.

There’s a good argument as to whether male writers understand and employ feminism in their writing, read up on the subject or just writing strong characters. From my perspective of writing female characters, I’m probably in the Whedon frame of writing strong characters who just happened to be female, without thinking about feminism. Oddly, there is no mention of the comicbook series that continues Buffy’s adventures.

I’m only familiar with ‘The Hunger Games’ films than Suzanne Collins’ original books where Hohenstein focuses on. I can see the empowerment of women here through the lead character Katniss Everdeen but still think it was more a point of switching roles. The same motivations would have worked with a male character in protecting family and clan. As with films, there aren’t enough books out there with female leads, even in our genre.

I’ve even less familiar with the Disney film ‘Brave’ (2012), so really can’t draw any comparisons. However, when you consider that several of Disney’s latest animated films have had female leads, I would be more inclined to think it comes more from the stories they selected and capitalising on cinema seats. If a different trend showed itself, I’m sure Disney would change as well.

Hohenstein uses a publicity photo from ‘Buffy’, pointing out that the vampire slayer didn’t wear such clothing in the series. Granted Buffy didn’t do so at night when she was on patrol but she certainly did so during the day. Considering Cordelia dressed as the most popular class student, showing off her body is key to her success. Oddly, she ignores Willow, who is actually suitably dressed not to be sexually attractive, although actually she is supposed to be the polar opposite to Cordelia. Although I’m not sure a discussion on fan-fic is appropriate in this book, the main reason that there was no sexual attraction between Buffy and Willow is that both characters have different sexual tastes and even the fans realised that.

Although it’s reserved for the notes, Hohenstein appears to think strong female leads in films is a new thing. Granted, it might be few and far between over the decades, they are there if you look for them. What about Glynis Johns in ‘Miranda’ (1948) and ‘Mad About Men’ (1954) mermaid films. Margaret Rutherford starred in four ‘Miss Marple’ films, Raquel Welch as ‘Fathom’ in 1966 and others. Julie Andrews in several films including ‘Mary Poppins’ (1964), ‘The Sound Of Music’ (1965) and ‘Thoroughly Modern Millie’ (1967) and these were off the top of my head.

Then there are the Doris Day films and even ‘Bewitched’ (1964-1972) and various police series with women leads on TV which had a predominately female cast. I could go on. Granted that there aren’t as many as there should be but it’s hardly a new thing. I could start listing even more books, even in historical context like ‘Little Women’ by Louisa May Alcott and a whole host of female authors empowering their female charcters.

I’m even less sure about fan art changing skin colour and so forth has its place here neither. It’s a shame that there are so few samples here to back this up her case. This happened in the pre-Net fandom days but, really, it’s all about personal fantasies, even those of a sexual nature. It’s problematic that many of these films, as Hohenstein also notes, are from historical periods where people of any other colour than white, are not there. Granted, as she points out, films like ‘Mulan’ (1998) and ‘Pocahontas’ (1995) went some way to address this colour difference but this is really from the story matter choice.

All studio executives main concern is would there be enough popular interest and will it make money. Occasionally, they take chances but are often surprised when they get a big hit. If anything, it would be more questionable why there wasn’t a bigger trend that way and even follow-up films have taken a long time to be made.

It would have been interested in examining books into films where there are minimal female characters like ‘The Lord Of The Rings’ trilogy. Should directors add more female characters or stay true to the books? This applies to any adaptation, especially of historically written or period piece books. Applying modern ethics or feminism would be more out of place.

As you can tell, I’m reacting a lot to this book which is always an indicator that it isn’t a passive read. I do think the last two chapters is more an exploration of Hohenstein interests and justifications than proper exploration of her subject matter in the professional world. Unless you have interests in her fan subject matter, it would make it harder to pursue but this is often a problem with university books where their authors need to pad out their work.

She also thinks Wonder Woman belongs to Marvel and not DC Comics on page 211 and although that could be seen as a slip of the keyboard, someone at editorial should have caught that.

I’m not wholly convinced by Hohenstein’s choices and she needs to dig deeper to prove her case. I mean, Buffy didn’t volunteer to be the Chosen One and Katniss Everdeen stepped up to the mark because she had a plan. Hardly acts of feminism. Read and have a ponder yourself.