‘Fire Of The Dark Triad’ is the debut novel from Asya Semenovich that is a space opera meets psycho-thriller with a difference. It examines the impact of the gene-based Dark Triad personality comprising narcissism, psychopathy and Machiavellianism. 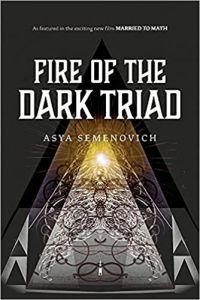 Multiverse’s Mirror Earths were devoid of any intelligent beings, so Earth colonised them. Eventually some asked for and were granted independence. When the seceded colonies started asking for more from Earth’s Commonwealth than was agreed, free aid was ramped down. A refusal for a medical software upgrade was met by a virus attack, which killed a third of Earth’s population before it was brought under control. Earth cut off the independent Mirror Earths without any technology that could be developed to pose a danger to themselves.

Research showed that terrorists were Dark Triads. So the Commonwealth removed those genes from their population to achieve a peaceful society. The side effect was to all but wipe out creativity and imagination from the population, which stops progress. Meanwhile, the cut-off Earths had let their Dark Triads run amok, some to their total destruction. The only solution for Earth is to bring back some Dark Triads from those cut-off worlds.

Nick is a headhunter for Dark Triads and a damned good one. So good that he gets a crack at retrieving a Dark Triad from the highly dangerous Mirror Earth known as Beta Blue. Unfortunately, he falls in love with a non-Dark Triad native and is determined to get her off the hellhole, no matter what. It will take all his cunning, stubbornness and egotism to try to do it.

This is effectively a self-published debut novel. This excellent Science Fiction story about a newish psychological concept, Dark Triads is marred by some basic beginner’s mistakes in the writing craft. For instance, the first section goes into a lot of background the world building of this multiverse. A more skilled novelist would weave the necessary bits of information into the main story as and when needed. There are quite a few what I would call mini-point of view jumps. This is when a section is written from one point of view and then jumps for a few sentences to another protagonist’s point of view. The information imparted during the switch is useful, but it does throw this reader out of the continuity of flow of the story.

One of the main characters, Hilgor, is a mathematician. We do not the clichéd semi-robotic producer of maths, but an intuitive mathematician who struggles for inspiration and recognition like forward thinkers in other subjects do. Semenovich clearly understands the struggles these types of mathematicians have and portrays it very well. As a mathematician myself, I wish I could see more about such people in Science Fiction. Fear not maths-shy, there is no serious maths in the novel.

Once past the first section, there is a lot of fast-paced action. Plot twists and turns are plenty, leaving us at times gasping in wonder. She does tie up all the loose ends in a satisfying spectacular final interaction between several Dark Triads.

‘Fire Of The Dark Triad’ is well worth reading for the new ideas, breadth of imagination and intuitive understanding it brings to the reader of the Dark Triad. I, for one, am looking forward to promised sequel.