‘Every Thing About You’ by Heather Child is a techno-thriller set in near future Britain, where automation and personalisation technologies have developed at a fast pace. 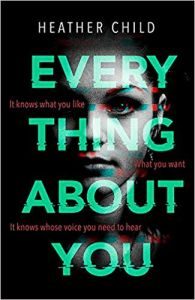 Freya is having a bad day. Her new smartface wakes her up early to get her to work on time and reminds her it was a discarded birthday present meant for Julian, her boyfriend. At work, an AI replaces her job as a sales assistant and she is demoted to catering. Back at the flat, she discovers why Julian prefers personalised automated entertainment to her company. She wants solace, like what she would get from her elder foster-sister, Ruby. Only Ruby had disappeared eight years before.

A smartface will give its owner what they want before they know they want it and Ruby is what Freya wants. A trawl of data later, it adopts Ruby’s voice and then her behaviour. Finally, it uses computer-learning algorithms to predict what Ruby would be like now. It acts to give Freya more confidence and independence, as her real sister would have done.

Inevitably, Freya notices smartface Ruby is older than when she last saw real Ruby. It gives her hope her sister might still be alive and that she is really not responsible for her presumed death. Personal guilt drives Freya to hunt for real Ruby. There is no hint of her in the data trawls after she disappeared. She must be somewhere where the Internet does not reach.

There is such a place close by that Ruby would have liked, Medieville, a mish-mash of historical settings with little technology. Only Medieville has its own secret, it is where Yearnfield, a fantasy adventure game is run from. Ruby is in there, in the west tower of the castle. This is where Freya goes searching for sister, in part to seek her own redemption. Along the way, she discovers the true nature of many people close to her.

Heather Child answers this question with gusto, taking us on a whirlwind tour of gadgets that would make geeks weep with joy. There is the heated self-wrapping scarf, the specs screening out the beggar with spring flowers, the smartbit that identifies a person’s mood via a colour, a haptic suit for virtual reality and loads more. We see the human responses, how the tech changes what people do, what its long-term effects are, how people become slaves and addicts to gadgets and how revulsion against gizmos builds up.

The author gives us contrasts to the gadget-based life. In a virtual reality world, ‘people don’t care where history ends and fantasy begins.’ Life is too perfect. There is no litter in the countryside. Pain is a short-lived bit of discomfort. If you die, you can return to where you left off. We see that perfection break down when real world desires and needs take hold. This world turns sinister, with evil and good lurking behind the masking fantasy characters.

Back in the real world, there is the carbon neutral village. Here, power use and hence information technology is very limited. It is a place where gizmos and gadgets for their own sake have no existence and cannot spring nasty sudden surprises. Where people have given up on the rat race and are content to live by their own means. They are so remote from society that they have to walk a mile to the nearest bus stop.

At every opportunity we read Freya’s reaction to the people and the worlds around her. This novel is no fast-action thriller, but a slow-burn tension builder. Being set in the near future, we are only partly familiar with the world. A lot is new, really new, beyond the accepted Science Fiction tropes. It needs explanation and, though the descriptions are succinct and precise, they need to be absorbed and understood by the reader. This novel cannot be read quickly to do it justice.

If you take each information technology development on its own, it sounds plausible. Put them working and interacting together and with people, it still sounds plausible, but starts being scary. Add in what people can do with these gadgets and gizmos the near future world becomes frightening. It could be too close to the truth and this is the novel’s real strength.