‘A Fantasy Medley 3’ contains four short stories by four authors, three of them as a lead-in, preview or reader magnet into novel series featuring the same characters. Each can be read as standalone so unfamiliarity with the background is not an issue. 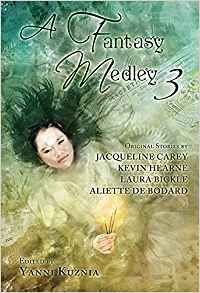 First up is ‘Goddess At The Crossroads’ by Kevin Hearne, which features Atticus O’Sullivan, hero of ‘The Iron Druid Chronicles’. Over a campfire, Atticus tells his companions about the night he met Shakespeare and how the adventure inspired Shakespeare’s witches in ‘Macbeth’. Posing as a French Count, Atticus sought out Shakespeare in London at a time when the bard was working on the Scottish play and wanted to see some real witches for research.

He had heard of sorcerous goings on out at Finsbury Fields so Atticus took him thither to a crossroads where three witches were summoning the Goddess Hecate. Atticus is an engaging character. The amiable and slightly buffoonish Shakespeare reminded me of David Mitchell’s portrayal in the British TV series ‘Upstart Crow’, not the author’s intent or fault as that didn’t air until 2016, a year after this book. ‘Goddess At The Crossroads’ is a smooth, entertaining comedy/drama of which Shakespeare himself would be proud.

The action switches to a modern-day setting for ‘Ashes’ by Laura Bickle. Arson investigator and powerful spirit medium Anya Kalineczyk, aided by her salamander familiar Sparky and Charon, the Ferryman of Hades, hunt fire elemental Nain Rouge through Detroit during the festival in his honour. This mythological mish-mash features creatures from several creeds but holds together even so. A decent adventure yarn with the bonus that it spurs one to research the history of Detroit. I didn’t know but do now, that Pontiac was a rebellious Native American and Cadillac, a French explorer. God bless Wikipedia!

I thought ‘The Death Of Aiguillon’ by Aliette de Bodard was set in a mediaeval Paris until a motor car turned up near the end. In a magical war that engulfs the city, the House of Aiguillon has fallen and Huyen the kitchen maid finds herself out on the street, homeless and hungry. While fleeing the House, dodging looters, she saved a weakened being called Mandias, one of the Fallen. Once clear, he left her to fend for herself but promised to return. She didn’t believe him. The struggles of the desperate in a magical war-torn city are much the same as those in a real war-torn city but aid comes from different quarters. While reading this, I wasn’t sure if I liked it but the ending saved the day.

Fourth and last but not least is ‘One Hundred Ablutions’ by Jacqueline Carey which doesn’t appear to be part of a series. Dala is a Keren and for three centuries her people have been slaves to the Shaladan, tall creatures who came out of the desert and conquered their valley. Certain Keren maidens are selected as handmaids of Shakrath, the god worshipped by the Shaladan. This involves going back and forth to the river to fetch water for the ablutions of the title.

Handmaids of Shakrath are celibate servants of an alien god with lives of unremitting toil, not allowed any contact with their own people. First-person narration worked well here and it’s refreshing to have a young female character at least partly motivated by her sexual needs, generally regarded as a male fault. In many ways, this was my favourite in the book.

So, if you are fantasy series fan looking for a new one to pass the hours, this sampler is an excellent way to see what’s available. Even if, like me, you are a simple short story aficionado, the book is still worth reading. It’s out of print now but second-hand versions are available and the price for them indicates its popularity. 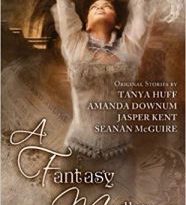