‘Distracted: Reclaiming Our Focus In A World Of Lost Attention’ by Maggie Jackson is an update of her 2008 book. Her contention is people are doing far too much on-line through various devices and not paying attention to the real world with a variety of examples is something we should all be familiar with. I suspect some of you reading here might even do that and you’re probably the target audience. 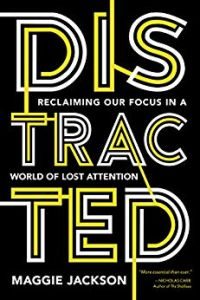 As I don’t even own a mobile phone, having lost money by disuse over a decade ago now when it was mostly for talking, I still find it bizarre seeing people walking around typing or talking into them and surprised there aren’t any accidents by them not looking where they are going. I doubt if people will change their habits too much but do think at school, they should be taught time management and that it’s not urgent to reply to every e-message instantly.

One section I was very disturbed by was Jackson’s recounting how Americans spend so much time on the go that they rarely sit down for long to eat anything and are continually snacking. I wish she’d joined the dots to the American problem of obesity. Mind you, I’d love to see a film or TV series demonstrating it as characters rarely seem to be following this path.

Likewise, Jackson recounts there appears to be a growing American habit of parents having their children under their hidden camera surveillance. Yes, there is a good argument for Internet control but to watch everything kids do in their bedrooms is removing any sense of privacy and you do have to wonder how this will affect the next adult generation.

Of course, Jackson covers how we don’t always see what we think we are seeing and rather than explain that, do the test below. https://www.youtube.com/watch?v=vJG698U2Mvo

In an odd way, Jackson is also slightly guilty in hiding her message in a lot of examples that needs your full attention to read through. Considering that she points out that even university students rely on the Internet for their information and not even do a wider sweep than the first Google word searches. Getting the people whom this book is aimed at means you do need to breech the gap so they actually read the book.

I do think students of any age should be given some regular lessons in the art of researching a subject. Without that, they aren’t likely to look for credibility and accuracy in the information they are looking at. Popularity doesn’t always means something is right, just the fact people go to the same well for information. This is even more so on the Internet when alarm bells should be ringing when the same text appears in different websites which means it’s been copied than thought about. Mind you, university text book authors can also be stuck in a similar rut when they compare people’s opinions than make one of their own.

Talking of distractions, I do have to wonder if Jackson had one of her own when she has a look at robots. Are people going to rely more on robot help than do things themselves? There’s still a matter of cost and whether you’d have a job to pay for one.

The viability of keeping our information safe and long-lasting is rearing its head. Jackson points out that we’re only now learning how long our various mediums last and how anything on floppy disk might no longer be retrievable, although she clearly hasn’t got the USB gadget that I have even if I haven’t used it for a few years. Even so, I take her point that some software isn’t capable of accepting older files although I suspect we geeks routinely update the files rather than lose data. I’m also pretty sure that manufacturers will improve their DVDs and such so data isn’t lost over time.

Jackson sprung another test by Mike Posner that I looked up on-line: https://www.psytoolkit.org/experiment-library/cueing.html which measures your attention span although I have to confess that I ended up focusing on one side and using the corner of my eye on the other. I suspect it will take practice, more so in getting finger co-ordination. I do wonder if gamers do better or worse at these kinds of tests.

I do think Jackson doesn’t make allowances for advancing technology or how some software can retrieve older generation files but those are minor grievances.

Considering so much of this book is focused on your attention span, it does make me wonder if we’re ultimately going to either have a lot of multi-taskers around or a lot more accidents. If you come away from this book with the realisation that you can’t do everything at the same time and need to focus on what is important, like protecting your life in crossing the road or doing more than one task when driving a car then maybe we’ll have a safer world to live in. There’s a lot you can learn from this book, providing you stay focused on the content. Don’t get distracted.