The fourth book in Didier Ghez’ series ‘They Drew As They Pleased: The Hidden Art Of Disney’s Mid-Century Era: The 1950s And 1960s’ moves us up a decade and five new more artists. These were selected by Disney to present some new style compared to what his team had created before. As an introduction, Ghez also looks at Disney’s early attempts at getting involved with television but using Hurrell Productions to simplify the art for commercials was a definite come down for the the fans and the connection there was quickly broken. As other studios with more simplified animation were winning Oscars, I could see Disney’s problem although as his company was seen as the gold standard he couldn’t drop his quality. Disney also realised he needed new talent and the artists here are certainly that. Two of them were even married to each other although they didn’t actually work together. 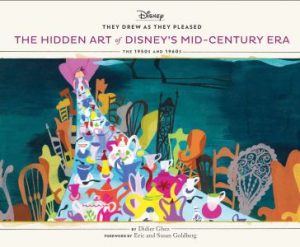 Lee Blair (1911-1993) broke into animation in other studios as an inbetweener with a desire to move up into full animation. However, it was his work in water colour that attracted Disney. You can see his work on ‘Pinocchio’s underwater scenes and ‘The Dance Of The Hours’ in ‘Fantasia’ as well as in the ‘Saludos, Amigos’. Seeing his work here shows not only how good a colourist he was but some superb pencils as well.

His wife, Mary Blair (1911-1978) was also a water colour artist and even more renowned than him. She wasn’t keen on animation but was influential on ‘Dumbo’ and ‘Lady And The Tramp’. The trip to South America gave more than the rest of the team in introducing new colours to the likes of the ‘Saludos, Amigos’ and Disney sent her to explore the likes of Cuba. Looking at the samples here and I did wonder on how I’ve seen this before until realising her influence went beyond the work here.

Tom Oreb (1913-1987) worked up from animator to designer on the likes of ‘Dumbo’, ‘Alice In Wonderland’, ‘One Hundred And One Dalmatians’, ‘Sleeping Beauty’, ‘Cinderella’ and ‘The Adventures Of Ichabod Crane And Mr. Toad’. It’s also interesting seeing several still-born Disney projects noted as well. Ghez points out that Oreb was forgotten for several decades but when you consider his influence I find that more surprising. While he was at Disney, he was the chap you saw to design your characters.

Cartoonist John Dunn (1920-1983) moved into animation by being an inbetweener on ‘Peter Pan’ to key concept artist on many of the TV projects Disney lined up. Reading his history here, though, his work is seen more at DePatie-Freleng where he worked from the mid-1970s creating most of their theatrical characters except the Pink Panther but was involved in its opening titles.

Finally, Walt Pergoy (1925-2015), a rather headstrong artist who moved from inbetweener work for Disney to background design painter on ‘One Hundred And One Dalmatians’, ‘Sleeping Beauty’, ‘The Jungle Book’ and ‘Sword In The Stone’ adding different colour combinations than usual saying he would make them work. He also spent 4 years at Hanna-Barbera (1968-1971), doing backgrounds so if you’re familiar with their cartoons from that time period, then you would have seen his work. Pergoy was also involved in some designs for Disney’s EPCOT.

Again, these books are a treasure trove of art that the samples included here only touch on. If anything, they are more a demonstration of these artists skills than their work for Disney. There is also a lot to contemplate and ensure these artists are not forgotten.