Those of a certain age might remember Marvel UK’s late 80s attempt to create a series of ‘American format’ comic franchises. There was ‘Dragon’s Claws’ – a futuristic mash-up of The Dirty Dozen and Rollerball; ‘The Sleeze Brothers’ – two future private detectives with more than a hint of ‘The Blues Brothers’ and ‘The Knights Of Pendragon’ – an attempt at cashing on the relative success of Captain Britain.

Whilst all these titles would ultimately become extinct within three years, they are still fondly remembered by many a comicbook fan of the era. Perhaps the most enduring character from that period was Death’s Head, a robotic ‘Freelance Peacekeeping Agent’, ie bounty hunter, who found himself drifting from frying pans to fires with wild abandon. Created by writer Simon Furman and artist Geoff Senior, the character first appeared in ‘Transformers’ and, as many characters did in the 80s, ‘Doctor Who Magazine’ before graduating to his own title. ‘Death’s Head: Freelance Peacekeeping Agent’ is a collection of the large majority of the work featuring the first incarnation of Death’s Head, begins with Dragon’s Claws # 5 where he appears as the ostensible villain of the piece. It’s all a bit macho and things blowing up all over the place, but it’s an interesting intro to his character. From there we’re thrust into the main set-up of Death’s Head # 1. In a future Earth, the year 8162 to be precise, Death’s Head plies his trade to anyone who has the cash. With unwanted sidekick Spratt making his life difficult, he comes up against various lowlifes and criminals in a never ending fight to come out on top and in profit. He’ll fight the mob, as well as work for them and find himself at odds with some familiar super-heroes and generally cause chaos.

Given that the late 80s was the time when every super-hero was dark and angsty, it’s unsurprising that Death’s Head chief character trait is amorality. He doesn’t care about good and evil, all he wants to do is make money. But whereas Alan Moore, Frank Miller, Neil Gaiman, et al would examine the dark recesses of the psyche and explore notions of morality, there’s much more a sense of unfettered anarchy here, a joyful blend of satire and ridiculousness. Despite his mechanical status, Death’s Head as a character has a unique charisma as his stoicism provides a perfect counterbalance to the more outré elements of the story. Unsurprisingly, both the tone and aesthetic have a resonance with ‘2000AD’ and Judge Dredd in particular.

This is partly from the work of familiar artists such as Senior and Lee Sullivan who create a densely packed future world, a sprawling metropolis that mashes the likes of ‘Blade Runner’ and Mega City One in an unholy riot of background detail, character invention and colour. But it’s also due to the sense of satire with the late 80s death throes of Yuppie culture and ‘greed is good’ sentiments being parodied and skewered. Indeed, there’s a very British sense of cynicism on offer throughout.

The narrative of early issues move along at a cracking pace. As the modern comic fan has become used to over-arching storylines and carefully plotted ‘event’ stories, there’s a certain sense of everything free-wheeling. Whilst there are some hints of an on-going story, each issue is pretty much self-contained and it keeps everything entertaining without becoming too bogged down in back story or exposition. Later issues take Death’s Head away from ‘future Earth’ after an encounter with the Doctor and DWM comic strip character, Dogbolter. This issue which is sadly missing from the collection, presumably due to rights issues. These latter stories see Death’s Head face off with the likes of Iron Man and the Fantastic Four which, while also fun, seem slightly more forced.

Running for a scant 10 issues, the Death’s Head story was continued in graphic novel ‘The Body In Question’ which is also included here. Tying up some narrative loose ends as well as exploring more about the creation of Death’s Head, this dispenses with much of the OTT satire and is a lot more sombre and serious piece of work. There’s still much to enjoy with Geoff Senior’s art giving everything a grand fantasy feel and a much more muted colour scheme which adds a certain elegance.

The rest of this collection is rounded out with various guest appearances by Death’s Head amongst numerous Marvel titles including the ‘Fantastic Four’, a fun issue of ‘She-Hulk’ and a strange team-up with the Hulk from an issue of ‘Marvel Super-Heroes’.

Death’s Head would go on to have a few more incarnations such as ‘Death’s Head II’, a new version of the character which isn’t really explored in this collection apart from an issue of ‘What If…?’ and, after a 2005 online poll in which Marvel asked readers they would like to see return, a third incarnation of the android. It’s a testament to a character who, despite having a comparatively small body of work to his name in the Marvel Universe, seems to have a devoted fanbase. Certainly, reading this more than 30 years after his initial appearance, it’s surprising how well the character has dated. There’s something timeless about his absolutism mixed with the resolutely tongue-in-cheek.

This is a fun collection with lots of extra artwork, covers and bonus features, though the absence of the aforementioned ‘Doctor Who’ issue is something of a shame. It’s also a shame that there’s no contemporary interviews with the likes of Furman and Senior, as it would have been interesting to know some more about their take on the character. But these are minor quibbles in a fun collection of a character who maybe deserves a bigger role in the Marvel Universe. So read these stories, and stay healthy. Yes? 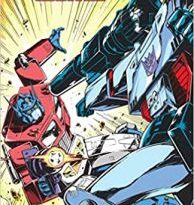