The cover image for this graphic novel adaptation of Cixin Liu’s story ‘The Village Teacher’ seems very incongruous. The title brings to mind a quaint little village hall school scene, but the cover features an interstellar battle fleet destroying a planet. Oddly enough and not unusually for a Cixin Liu story, both entirely different scenarios form parts of this tale.

A recurring theme in his short story collections is the arrival on Earth of an alien visitor who ends up interacting not with the President of the United States, but with an obscure individual somewhere in the vast Chinese countryside. 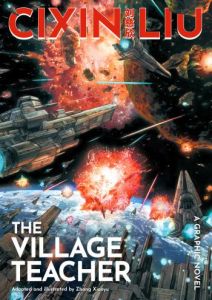 In this case, the story focuses on a village teacher called Mr. Li who lives and works in a very poor, rural village. Farming is still done by hand, education is not valued at all and entertainment and alcohol play a large part in the lives of the men of the village. They do not appreciate Mr. Li’s attempts to educate the village children and would rather send them out to work in the fields. The illustrations by Zhang Xiaoyu have a wonderful earthy quality to them, showing the hard life of the villagers in the dilapidated state of the buildings and the careworn lines of the villager’s faces.

Meanwhile, in an interstellar battle between carbon-based and silicon-based life-forms, the carbonwealth government come to the difficult decision that they must annihilate a vast swathe of the spiral arm of the Milky Way as a kind of firebreak to halt the advance of the silicon empire. Despite the entirely different setting, the illustrations that accompany these sections have a similar feel, particularly with the close-ups of the carbonwealth leadership displaying this earthy, textured quality.

They decide to assess each planet slated for destruction to determine whether the native life-forms have reached a level of intelligence that marks them as worthy of being saved. By this time you can already see that if they met Mr. Li’s fellow villagers, the Earth would be doomed.

There are some great contrasts in this graphic novel, not only between the destitute village and the interstellar battle fleet, but in the stark dichotomy between Mr. Li’s dilapidated village school room and the modern, high-rise city that he visits at one point. The hopeless, self-perpetuating poverty of the villagers is painfully illustrated in their conversations as well as their actions. This adaptation by Zhang Xiaoyu has masterfully captured the human qualities that Cixin Liu is so good at illustrating with words.

The alien fleet, too, despite the vast scale of their war and the huge decisions they have to make for the sake of the entire Galaxy, are portrayed with humanlike qualities and expressions.

It’s another great adaptation in this series of graphic novels based on Cixin Liu’s works, faithfully presenting his vision in a new format that adds depth and pathos. It is a highly effective and enjoyable version of this tale 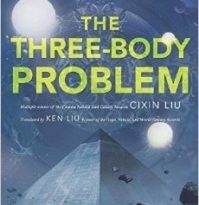 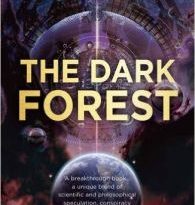 Cixin Liu’s The Circle: A Graphic Novel (The Worlds of Cixin Liu) by Xavier Besse.