David Diamond and David Weissman’s book, ‘Bulletproof: Writing Scripts That Don’t Get Shot Down’ has nothing to do with providing your script with a flak jacket and a heavy lining of Kevlar but all to do with not writing scripts with plot-holes in them. It took them 5 years to break into the Hollywood scriptwriting business and a lot of rejections, which they cover in the opening chapters. However, along the way, they give you the pep talk that I bet they wish they had at the time. Study the best films in the subject matter you’re targeting and see what makes them tick.

Their own breakthrough script was failing when they took a long hard look at it and decided to rewrite the script as if Disney were going to produce and sold it, this becoming ‘The Family Man’ (2000). There’s a lot more detail than that and they will point out that the Hollywood system depends on getting people interested who want to belong to a project and work your way up the studio chain. The biggest detail to take in is to forget you’re writing a script but writing a film. 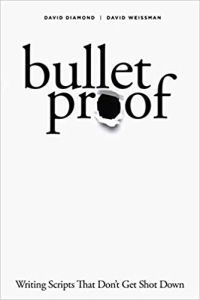 Oddly, the main example how to do one/two pager synopsis and a character journey map through the story in two pages is devoted to an obscure 1977 film called ‘Star Wars’ which, if nothing else, will teach you how to write these things briefly and not get caught into too much detail.

Obviously this book is targeted as to how to break into the Hollywood system which means a lot of work networking and paying bills by working in any job in the film industry. If everyone else there has similar dreams, I suppose you’ll either have rivals or useful contacts if they are after other jobs like becoming directors or producers.

A lot of the information here shows how to talk the same language and understanding the procedure to convince people that your script needs more than a cursory look when you do the pitch. Oddly, the script itself is usually the last thing that is looked at simply because people haven’t got the time to do that, well, apart from studio readers who work through the slush pile. Something I didn’t know was you can log your script in the Writers Guild Of America without actually belonging to it.

There are a lot of information here in how to minimalise to get the right page count. There are some lessons here that can also work for prose especially ensuring that characters can be told apart. Working out plots are crucial before writing most stories so there are no surprises that you can’t sort out. Something else that is crucial is paying attention to the notes given as to what is wrong and not necessarily following them but focus on it as something that is not getting through properly and find something to give it a bit more oomph! You also need to consider ‘set pieces’, the scenes that everyone remembers from the film and often used in the promotion of it later. In prose, this tends to be the plot resolution but I can understand it being using within the film.

Oddly, although I put paper markers throughout the books I review, a lot of what I wrote above came purely from memory which shows how much of it sunk in. There is a lot to learn here and it even helped me sort out a problem I was having with the story I’m currently working on.

I might not be interested in writing a screenplay but the pep talk they give can be applied to all manner of fiction. Learn from the best but don’t copy other than understanding what made their films successful in the first place.