Following on from ‘The Avengers: The Age Of Ultron’, T’Challa (actor Chadwick Boseman) returns home for the ritual to become King of Wakanda and the official inheritor of the Black Panther guise. His first chore, though, is to apprehend Ulysses Klaue (actor Andy Serkis) who has retrieved a piece of missing vibranium to power his bionic arm’s sound weapon. Thing is, sans arm Klaue is rescued by Erik Killmonger (actor Michael B. Jordan) before being killed.

T’Challa later learns that Killmonger is his own step-brother. Into this mix is CIA agent Everett K. Ross (actor Martin Freeman) who takes a nearly fatal bullet for T’Challa who has no choice but to get him to Wakanda to recover and who then learns the truth of just how technologically advanced their land is. On recovery, Ross gives them more history of Killmonger that they didn’t know. Killmonger wants his birthright and to challenge T’Challa for the throne and the latter loses.

Oddly, Killmonger isn’t traditionally evil but wants to right black prejudice for the black man world-wide. It’s just the way he wants to do it that could put Wakanda in trouble. 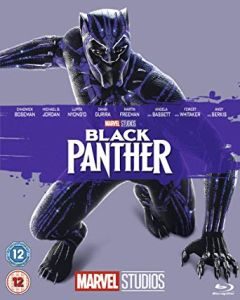 Meanwhile, T’Challa’s mother (actress Angela Bassett) and sister Shuriu (actress Letitia Wright) take Ross to the gorilla tribe M’Baku (actor Winston Duke) leads for sanctuary and discover T’Challa in a coma and brought back to life. T’Challa sees no choice but to continue the challenge as he never surrendered. There is much division and rebellion and spoilers if you’re still catching up like me.

I can understand how this film got its liking. It transcends colour and even addresses how to deal with explaining why and how change is on the way. Instead of western technology is coming to Africa, superior African technology is coming the other direction. Things are not likely to stay the same on Marvel Earth.

I think one of the problems I have with the largely female cast is keeping up with who is who and that this wasn’t largely defined by who they were, especially with so many in similar costumes. Hence, I’m not sure who else to identify in the brief synopsis above.

The audio commentary is with director Ryan Coogler and production designer Hannah Beachler. Between them, they created a 300 page background of Wakanda. When you think back to Stan Lee and Jack Kirby, I suspect they created as they went along. At least they agree with me on one thing, there’s a lot of characters to keep track of. The sets are based on colour tints with London being based on blue as an example although that was filmed in Atlanta. Interestingly, they focus more on the filming then the actors. I wish I had a pound for every time Coogler said, ‘you know what I’m saying’, as I’d be very rich.

The 25 minutes of featurettes targets Wakanda’s African cultures blended into one but I do have one problem. If all the best warriors are women, why have a man for a king? The 90 second ‘Gag Reel’ is far too brief and considering how some of it was funny, I wish there was more. The ‘Deleted Scenes’ running on 4 scenes does fill in some gaps.

Far more interesting to me is the 20 minute ‘The Page To Screen: A Roundtable Discussion’ where the producer/writer Ryan Cooglar and co-scriptwriter Joe Robert Cole discuss Black Panther’s background and development with comicbook writers Don McGregor, Christopher Priest and Ta-Nehisi Coates. ‘Marvel Studios: The first Ten Years’ running at 9 minutes should catch you up with what’s been going on in case you’re lost.

If I have to be critical of ‘Black Panther’ then I think it’s a little too long, although I understand that there is so much to establish to build up to various events.

(region b blu-ray. pub: Disney. 135 minute film with extras. Price: I only paid a couple quid thanks to Nectar points (UK). ASIN: B079QGSMGV)