‘Jewels In The Dust’ is a collection of short stories by Peter Crowther. Publishers’ lore states that single-author collections are death at the box office so you need a high rating to get one put out. Does Peter Crowther deserve the honour? I’ll pick out a few highlights from the collection to show that he does. He certainly does. 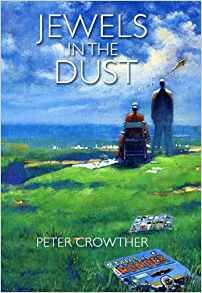 The collection opens with two stories about young Tom and Charles, pals who live in a small mid-western town called Forest Plains. In ‘The Bachelor’, Tom visits Old Man Milton, a former school teacher, now a recluse who never married and is a well-known local eccentric. This is an exploration of the power of memory and a short, sweet version of Stephen King’s ‘Apt Pupil’ in which a kid visits an old man for darker reasons. It’s followed by ‘The Fairy Trap’ in which the boys meet an old man who claims he can trap fairies. Not quite my thing but Crowther’s prose carries it off well.

In our modern, selfish age where moving on and finding your own path are all the rage, it’s refreshing to have a story like ‘Old Delicious Burdens’. Geoff and Louise are on the verge of breaking up but, one night, they are visited by the ghosts of their past selves. A slow starter but very moving. Actually, most of the stories are slow starters. Crowther is one of those writers without a plan, who sometimes doodles around with the characters until he finds out where the stories going. It sort of works as long as the reader is patient.

A failing relationship is also central to ‘The Doorway In Stephenson’s Store’. Jeff Mennark is a comicbook fanatic who met and married Lorraine Larruto, ‘a dark-haired beauty who reminded him of Lori Lemaris, the comic book mermaid who occasionally vied with Lois Lane and Lana Lang for the attentions of Superman.’ Jeff went into buying and selling comics when the prices started going mad but got in serious financial trouble when the market crashed. Now he and Lorraine are on a road trip to try and forget about it.

They come across a rundown general store in the middle of nowhere and find the doorway of the title. As Crowther makes clear in the notes at the end of the book this is a homage to the 1950s DC Comics he adored as a kid and the story is dedicated to editor Julius Schwartz. It struck a chord with me because I feel the same way about 1960s Marvel Comics and it’s a great story. Like his idol Ray Bradbury, Crowther does not renounce or disparage the simple pleasures of childhood but sings their praises. Good for him!

It’s not all cuddly. Crowther can do horror, too. ‘Breathing In Faces’ has nice girl Marilyn and pretty, manipulative girl Cindeline going to a carnival that just showed up in town. They see a sign advertising for attractions and Cindy is interested but the sideshow barker tells her it isn’t open for business right now. She tricks her way in and emerges changed. As usual, the small town America of 1937 is beautifully evoked in dialogue and narrative, ‘pure foolishness’, and the horror builds slowly. Very good.

It would not be a kindness to give away the plot of ‘Tomorrow Eyes’, narrated in the first person by a gang enforcer in Miami searching for a dentist who does not pay his debts. He meets up with a professional gambler of his acquaintance, who has acquired a pair of marbles that he does not wish to keep. Crowther calls this his ‘Damon Runyon’ story because of the style in which it is narrated. I think that it will please both guys and dolls.

The author’s style is unhurried. He meanders a little but the meandering is pleasant to read as he’s a fine stylist with good insight into the human condition. ‘The Musician Of Bremen’, for example, about a jazz contest in a southern state of the USA, is one of his favourites according to the notes at the end of the book but I thought it took too long in the telling. On the other hand, it said this, ‘Most of those who turned up didn’t sound like they wanted to play. They sounded like they wanted to succeed…to earn. There’s a difference and it doesn’t make for a good musician’ or a good writer. Crowther definitely turns up to play, not to earn, otherwise he’d be doing ten volume fantasy sagas and he plays divinely at times.

Sometimes Crowther collaborates and when he does, as in ‘Dei Gratia’, written with Simon Conway, the tale tends to be a bit more snappy. There are more conversations and fewer poetic descriptions. This is a fantasy about doctors refusing to cure people, letting them die, and Mayor Steve Lander needs to find out why. Blackly comic, if you like that sort of thing and I do.

Peter Crowther is an English writer from Leeds and it seems odd to me that so many of the stories are set in the United States. Admittedly, he’s a passionate admirer of Ray Bradbury and clearly wants to emulate the small town atmosphere of his hero’s work but that could be found in certain British settings, too. I don’t think this is a marketing choice, he doesn’t seem to be that sort of chap, but rather an artistic decision. As the stories are great, who can argue? I merely point out the anomaly.

I love short stories and short story collections and, as a bargain basement short story writer myself, I especially love them when a gifted author puts notes at the back to tell you about the genesis of the stories. Stephen King does it and Peter Crowther does it as well. The notes are useful for anyone interested in the author and give some insight into his background, values and career progression. He currently runs the successful small press PS Publishing but hopefully still finds time to write.

I had a paperback advanced uncorrected proof from 2013 which states it will be $45.00 for the hardcover. However, the book has been sat in the SFCrowsnest pile for some time. Now that it’s a few years old, this jewel can be found in the dust of online bookshops for much less and it’s worth getting. If you like Ray Bradbury you will probably like Peter Crowther.