One of the recurring themes in Cixin Liu’s short stories is the arrival of an enormous alien artefact in the skies of Earth. Whether this is good or bad news depends on the story but, despite the same trope being used several times, I have always been surprised at what happens next in any given story. ‘The Devourer’ is one such story and one of Cixin Liu’s tales that have been adapted into graphic novel form, this time by JD Morven and illustrated with verve and energy by Weilin Yang. I read the original prose version in the collection ‘The Wandering Earth’ a few years back and remember being impressed by the sheer scale of this story, probably enough for an entire novel. 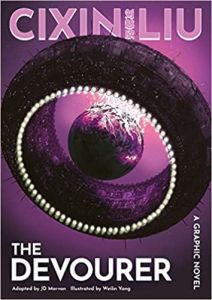 An object arriving in the solar system and causing consternation as it makes a bee-line for Earth turns out to be a crystalline construct bearing a warning message: ‘The Devourer is coming!’ The world-destroying megastructure is on its way and it seems that the Earth is doomed. Woven into this drama, to make things more intriguing, a group of archaeologists discover the remains of a dinosaurian civilisation from deep in the Earth’s past. I love it when an author introduces two seemingly disparate threads into a story. How are sentient dinosaurs related to a world-wrecking alien invader or are the two completely unrelated? Either option is equally intriguing.

The huge, toroid-shaped devourer (I’m not giving anything away here – it’s on the front cover) blasts its way through space in imagery reminiscent of ‘The Wandering Earth’, if you‘ve seen the film. The invaders have a history of millions of years and their attack on Earth lasts an astonishingly long time. This makes the story more thoughtful and paced than a standard alien invasion, which episodes spread apart over a long time while the Earth Defence Force attempts to thwart the invaders.

The graphics are gritty and dark, portraying the sense of doom that seems to continually build throughout the story. Throughout I was wondering how humanity would eventually triumph, but with Cixin Liu you can never be sure what might happen. It’s a great, epic story and really plays out well through the medium of a graphic novel.