Argosy Smith is a swashbuckling super-scientist hero in the tradition of Doc Savage but he lives in a very different future where you really must return overdue library books. In the 21st century, Earth moved into another region of space, an event known as ‘The Shift’. After The Shift, the laws of physics changed, space travel became possible, alien races visited Earth and it became part of galactic civilisation. Argosy lives on a space station and is rich enough to spend his life helping others. 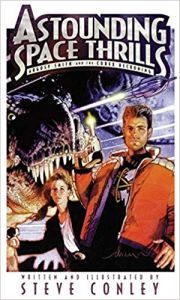 The first page is a prologue that shows Leonardo da Vinci returning to Earth five hundred years ago from somewhere unknown. It turns out he was kidnapped to work with other great minds on the Codex. Cut to Argosy Smith in the 21st century New York City public library looking for his friend, Theremin, a human transmorph made of biomass. Argosy needs help to steal the Codex from Mister Redmond, multi-brained head of Macroshaft corporation.

‘Steal ‘ isn’t really the right word as it’s meant to be payment for work done but Redmond reneged on the deal. The Codex contains the secret of how to enter Split Space or hyperspace, as it’s sometimes known, safely. Currently, nine in every hundred thousand ships is destroyed in the attempt. Argosy wants to let everyone have the knowledge free. Macroshaft wants to profit from it. The name of the evil corporation dates the comic. We have bigger ones now that make them look positively benign.

Argosy’s adventures involve a great cast of characters. Theremin has a head like a lettuce but dresses in a smart black suit. Petra Verachek is a healthy humanoid female mercenary. Mister Redmond looks great with a long clear forehead containing his several brains. Mooch the Globbin is a blobby alien life-form who has vast knowledge due to some cookies he ate but remains a bit stupid. There’s also Mister Solaire, a bald mad scientist.

‘Astounding Space Thrills’ is, as the title suggests, pulp fiction with far out science, wacky aliens, oddball characters, mercenaries, gangsters, evil corporations and mad scientists. The writing is in the style of early humorous strips in the ‘2000AD’ comic, the funny stuff by Alan Moore and others. There is also more than a hint of ‘Hitchhiker’s Guide To The Galaxy’ about the whole thing.

The contents of the book are amusing. The splendid black and white art is a homage to Jim Starlin and Jim Steranko. It tells the story clearly and is easy on the easy, downright pretty in fact. As well as the two-part tale of ‘The Codex Reckoning’, the book contains the single episode ‘Aspects Of Iron’, the five-part tale ‘The Secret Of Mooch’s Loot’ and ‘The Entropian Engine’ which took the form of a weekly online strip. Overdosing on such lightweight amusing fluff as this would give one mental indigestion; but in healthy amounts, it’s a splendid antidote to the grimness of real life and’ indeed, much fiction.