Hector A. Garcia’s book, ‘Sex, Power And Partisanship’, makes more sense with its sub-title, ‘How Evolutionary Science Makes Sense Of Our Political Divide’. In other words, are we bred to be the way we are politically. Essentially, he reasons that in the USA, to be a Republican or left-wing is to be overtly masculine and to be a Democrat or right-wing to be have more feminine values.

This has less to do with what sex you are but in what you stand for. Democrats are more likely to favour environmental issues and free medical care than Republicans. He doesn’t explain how or why some people can change between the two parties or whether this can also apply to main political parties in other countries. From a British perspective, the Conservative and Labour political parties are a lot further apart than the Republicans and Democrats in the USA, although I’m not sure if I’d put it in quite the same context as our Labour party is essentially that of the working classes. 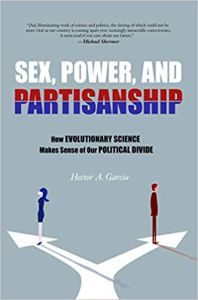 Don’t be surprised if a certain president’s name comes up from time to time, not to mention his own biases which are clearly not thought out before, literally, face value. It is worrying and contradictory that he is seen as masculine with, I was going to say thoughts, his words on how he treats women and gets away with it.

Garcia doesn’t stop at differences in political beliefs but also examines genetic differences and how some apparently looking differences like sickle-cell anaemia and preeclampsia – this one causes kidney and liver failure in pregnant women, do have beneficial effects.

Then it’s a jump back to people in power and some of the things they have in common. Something that Garcia doesn’t rationalise is that would the USA have voted in Hilary Clinton as president even if there wasn’t the fuss over those emails? America has a lot further to go in having a female president than electing an egotist into the White House.

Then again, Trump’s bully tactics ultimately won the day simply because so few people could punch back. This makes for a very good argument not to have media personalities running for high political office simply because they have more screen time than most. If memory serves, there is an American law about that which was disregarded.

Reading the comparisons between Fidel Castro, Kim Jong Un II and Ho Chi Minh should have you pondering on what having power really means to these people. Do we really want countries where everything is built around absolute obedience and no free will?

When you read here the number of countries where women have little rights, mostly still in Muslim-orientated countries, you have to wonder when things will change for better equality. As Garcia points out that the Old Testament of the Bible also sees women as second-class citizens. Mind you, being reminded that the USA gave women the vote in 1920 does show that the western countries didn’t suddenly change. Even the Pill wasn’t dispensed until the 1960s and there was still more fear of promiscuity than birth control.

There is a lot to be learnt from this book. I think if I was a woman, there are large areas of this book that I would be inflamed by because Garcia points out a lot of things that go on. There are some areas where I’m less sure about. Garcia doesn’t explore the herd concept. Even with political parties, people have a need to belong to something and there are only two choices.

Man is very tribal and needs to belong to some group. When it’s mixed with a desire to power, even more so. If anything, country leaders are in a small elite and as Garcia’s primate allegory points out, this can bring even bigger squabbles. 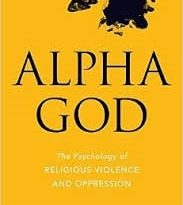