A sentient salvage ship named Singer and its crew encounter ancient alien technology and evidence of a terrible crime in ‘Ancestral Night’, the first volume of Elizabeth Bear’s new space opera series ‘White Space’. It’s written in the first person in a cheery, informal voice presented as the record of Haimey Dz, the ship’s engineer.

I’m never sure why a book written in the first person needs an explanation to justify it. First person works fine but, pretending that it’s an account recorded by the protagonist makes it seem unlikely, because who can remember things in that much detail? 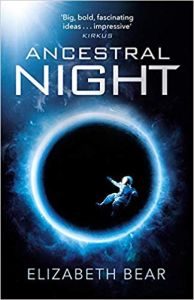 Haimey makes the point that she doesn’t know who her readers will be, human, alien, law enforcement or pirates and so she goes on to recount the story with numerous asides, rambling interjections and quirky humour. She gives enough in the way of explanations about the society or technology in use to be able to follow the plot and background, but makes no effort to explain other terms that are presumably common knowledge. Some of these are rather odd and kept pulling me out of the narrative to work out what they meant. For example, day and year have been replaced with dia and an, presumably something to do with Galactic time units not being the same as an Earth day.

This led to words like todia, which sounded toady but is the equivalent of today and decidia, which sounds deciduous but is a tenth of a day. There was also holotoo, which I realised was a holographic tattoo, but why not call it a holotatt, because who shortens tattoo to ‘too’? Various alien species were described in relation to their vague similarity to Earth animals: elephant, preying mantis, etc. So when Haimey goes into a space station and finds herself in the ox section, I initially assumed there was an ox-like species, before realising it was the oxygen-breathing section. Why not use the contraction ‘oxy’ instead, which is fairly standard? There were several other unnecessary contractions, too, which were just distracting.

Haimey has never been to Earth and lives in space several centuries from now, but her language is peppered with allusions not only to Earth-based things, but also to current culture. A lot of these sounded rather incongruous. She uses a flamenco dancer as a simile, which was the first one I thought rather odd but not the last. After several of these odd similes and metaphors, she then takes the time to explain what a spider is, as though the putative alien reader would be unfamiliar with that but perfectly familiar with flamenco dancers. When her partner, pilot Connla, says that something could literally never happen, Haimey interjects that he was the kind of person who actually meant ‘literally’.

She is apparently referring to the current trend of people using the word ‘literally’ when they mean ‘figuratively’. Why would that need to be mentioned several centuries from now? Is their language likely to be the same as it is now? Will the trend of incorrectly using the word ‘literally’ have ultimately changed its accepted meaning or will its usage have faded so that it regains its correct meaning? Either way, it made no sense that she said that.

Later on, she is worried that there might be a BOLO out on their ship. Really? A galaxy-wide culture several centuries from now using who-knows-how-many languages, still uses the acronym BOLO that is currently used by American law enforcement?

Anyway, aside from those irritations, the plot moves breezily from salvage to pursuit, investigations, intrigue, pursuit, hiding, interaction with mysterious alien species, pursuit and pirates. There’s plenty going on, intersperse with Haimey’s introspection and recollections of her former life. The experiences of her old life have left her emotionally stunted but, like all citizens of the Synarche, she has been ‘rightminded’ and is fitted with a device that allows her to control her emotions.

This leads to a lot of philosophising when she comes up against the Freeport ‘pirates’ who do not subscribe to such control. Neither argument was particularly convincing, so that although Haimey defends the Synarche and is loyal to it, the reader is left with the feeling that maybe the ‘pirates’ have it right after all.

In the end, there was rather too much introspection and philosophising, too many asides and quips, too many repetitions of things we already knew. All of this slowed down the pace of the plot and left me wishing they would just get on with it in rather less than 500 pages. If you like a bit of fun, zany space opera, you may well just love this. Humour is a tricky thing, though, and I found Haimey Dz’ narration irritating more than fun. There are some great concepts though and an underlying plot that’s full of bright, sparkling ideas. 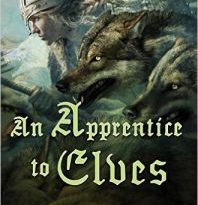