When a meteor crashes in the small town of Amber Grove, everything is thrown into chaos. Emergency services work tirelessly to treat the injured and contain the wreckage, while government agents descend upon the town to determine whether something other than a hunk of rock landed that day.

Little do they know that in one hospital, a few kind doctors and nurses are hiding a secret, a secret so big it could change our world forever. It wasn’t a rock that landed, it was a spaceship and they saved a child like no other the world has seen… 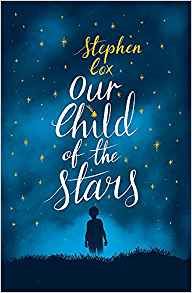 ‘Our Child Of The Stars’ is the debut novel by Stephen Cox, an American-born but London-based author whose Goodreads profile asks us to kindly note that he is ‘not the sculptor, the American Libertarian and expert on Jane Austen, or the guy who wrote a book on the Munchkins.’ From this short snippet, I think I like him already, although I’m probably going to google the Munchkins book!

Set in the late 60s and early 70s, ‘Our Child Of The Stars’ follows the day-to-day lives of Molly and Gene Myers, a fairly ordinary couple and their extraordinary adopted son, Cory. He just happens to be an alien that crash-landed on Earth and is now wanted by the authorities, presumably for less than pleasant experiments rather than a welcoming chat and a cup of tea.

It had one of the most captivating opening sections of any book I’ve read, the kind of opening that punches you in the face with emotions and just dares you to stop reading. I know I found myself utterly engrossed as this couple tried to patch their marriage together amid the strain of caring for this tiny alien and the terror of his discovery. I was pretty blown away.

Unfortunately, although the sense of threat from the authorities is established early on, little of the danger feels particularly real. It was hard to feel fear for the characters when the threat from the authorities consisted largely of men in suits prowling around with giant cameras hoping to snap a lucky photograph or intimidate someone into revealing their secrets.

I’m probably being a bit harsh and, I know the time period in which it’s set means it most likely would have been this way, but after such an incredible opening, I would have liked some of the emotion from that beginning to have carried through to the darker aspects of the book. I needed more of a sense of urgency to come across. Even the supposedly sinister government agent Dr Pfeiffer, who could have been a real source of creeping discomfort, felt a bit lacking. Maybe the author is just too nice to get properly into the heads of the villains yet!

I don’t say that last part just because I thought the bad guys weren’t as good as they could have been, but also because the ‘nice’ characters were so well done. Molly and Gene, in particular, really shone out of these pages. I felt joy and sadness with them and experienced parts of their lives so vividly that it felt as though I knew them intimately. Their friends and allies also came across well, whether they popped in for a few pages or stayed for the whole book and, although I admit that one or two of their actions seemed a little bit inconsistent, it was predominantly the threatening characters who felt a bit stilted.

The action jumped around a bit in ‘Our Child Of The Stars’ and my biggest problem with the book was its pacing. While I devoured the first section with barely a moment’s pause, I struggled with some of the later parts of the book and, at times, I found it difficult to follow how much time was passing between different events. I don’t want to put in any spoilers so all I’ll say is that certain events felt a bit too convenient and what felt like important moments sometimes rushed by with only a brief glance in favour of dallying over other scenes that seemed to have much less relevance to the story.

‘Our Child Of The Stars’ is a very good book. It has characters you’ll fall in love with and a plot that, even though it lacks a certain finesse in places, will carry you along until you know what happens to them. I will certainly be keeping an eye out to see what Mr. Cox produces next, because with a debut this promising, there could be great things from him in the future as he develops his talent.