We were offered a selection of magazines from Fantasm Media. Principally, looking at their website, they cover horror and Kiss, so which my fellow reviewer will be looking at the former, I thought I’d look at the latter, especially as the band are doing their ‘End Of The Road Tour’ right now. 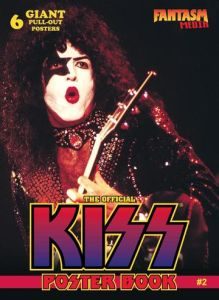 ‘The Official Kiss Magazine Poster Book # 2’ comes in six different covers and the one I received is E. As these A3 posters are stapled in, it’ll depend on you whether you take them out or buy multiple issues. They are good quality glossy paper with good registration. It looks like # 1 only came in one version. Although publisher Brian Stewart points out in the introduction he’s a big fan of the band, he hopes this hasn’t stopped him being professional with these magazines.

This issue’s articles focuses on how Kiss started, their album ‘Kiss Alive!’ which I agree is one of the best concert albums I’ve ever heard, before moving onto a school concert in Cadillac, Michigan, which they ultimately helped fund. I’ve heard of the film ‘Detroit Rock City’ about fans trying to reach a Kiss concert and its director Adam Rifkin points out that he never expected it to be made simply because of the cost of the music until his wife and Kiss got involved and he was on a promise to direct. Model maker David Pea discusses how he remade Sammy the Serpent for their last tour as well as their costumes. There’s also a look at KISS as comicbook characters, which makes it of interest here, and their ‘Dynasty’ and ‘Monster’ albums.

Of course, there’s stacks of photos, mostly from their final tour which should keep any Kiss fan happy.