Zinnia Gray has been dying her entire life. Cursed with a fatal genetic disorder, she is well aware that her time is short. No one with her disease has much life beyond 21. Today is her 21st birthday. In a tribute to a childhood obsession that turned into a college degree, Zinnia’s best friend throws her a Sleeping Beauty themed party in the closest thing small town Ohio has to a tower, the crumbling remains of a prison guard tower.

All the trappings are there: sparkling (plastic) tiara, roses, (second hand store vintage) spinning wheel and a true love (best friend) to kiss. So Zinnia should not have been surprised that pricking her finger on the spindle pulls her into a fairyland where a cursed princess pleads for her help. 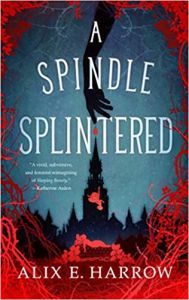 I confess I avoided this book for quite some time. Ho hum, another retelling of a fairy tale. At least it’s not another reworking of Arthurian legend. Just this year I’ve read two versions of Cinderella, one a SF robotic retelling of Cinderella, Marisa Meyer’s ‘Cinder’, the other mundanely historical, Gregory Macguire’s ‘Confessions Of An Ugly Stepsister’, plus a Fae filled historical version of Rumpelstiltskin, Naomi Novik’s ‘Spinning Silver’.

All the retellings out there take the beats of the story we know and add a whole new dance to them. Sure, fairy tale retellings can be well-written and enjoyable but my mind was filled with the sense of ‘been there, done that’. Alix Harrow took that feeling and gave it a protagonist learned in folklore and able to expound on the historical origins of the fairy tale and its many, many issues. A self-aware protagonist who knows the beats of the story she’s been set upon by fate and the brains to try to subvert the rules of her own narrative.

Stories are often described as mirrors held up to society. As much as Zinnia hates the powerlessness of her character archetype, she still feels a strong affinity with the story as a whole because she can see herself in it. I’m betting anyone reading this, especially if they are a ‘minority’, agrees that many stories out there right now aren’t reflecting who we are right now. ‘A Spindle Splintered’ is a story very aware of that fact while also understanding that we also love these stories, which is why they’re retold, reworked and remade so often.

For a title character, Sleeping Beauty says practically nothing. She gets born, cursed, grows up in a safely smothering castle, falls asleep to get kissed awake by a stranger who everyone declares is her true love. Sleeping Beauty is defined by her title, a role that could be performed by a mannequin. We know these stories. It doesn’t matter if the princess pricks her finger on a spinning wheel or a flax stalk. We know that her role after this minor injury is to lie still and be pretty while some guy fixes things. Zinnia knows all of this. Knows that as the ‘dying girl’ people find her easier to deal with not as a person but an abstract.

Harrow tells us she was inspired by ‘Into The Spiderverse’, a film that gathers multiple versions of Spider-Man together to do what Spider-Man does and fight crime. All of these Spider-Men take on the role through the traditional radioactive spider-bite and go forth to fight for the good. Male or female, blonde ballerina or sepia noir detective, all the Spider-Men fulfil their role in a way that they chose. Unlike the movie, ‘A Spindle Splintered’ really only focuses on two incarnations, with others getting little more than a cameo appearance, which allows Princess Primrose and Zinnia to become fully fleshed and self-aware actors in their own story.

I liked this book so much more than I expected. If there were a teen in my life I’d get them a copy. Even though it’s a novella that’s in hardcover which irks me no end as a book unlikely to fit in my bag if we ever get to go places again. ‘A Spindle Splintered’ is a lovely book for any fan of a fairy tale but it will find a special place on the shelves of the literary nerds and those who can’t help but analyse who speaks and who is taking action in any story they consume.